Three late polls find the Coalition with a narrow two-party lead, and Labor hanging on in its seat of Chisholm in Melbourne.

First up, the final reading of BludgerTrack, which after the addition of final results from Newspoll, Galaxy, ReachTEL, Ipsos and Essential Research is almost exactly where it was on Wednesday, so far as national voting intention is concerned. However, the Coalition is down a seat in New South Wales and Tasmania, and up one in Queensland and Western Australia. As always, I must stress that this is a two-party model that doesn’t take into account the Nick Xenophon Team factor and strong independent challenges in New England and Cowper, which could potentially cut the projected Coalition majority to the bone. I’m afraid I haven’t found time to update the personal ratings. 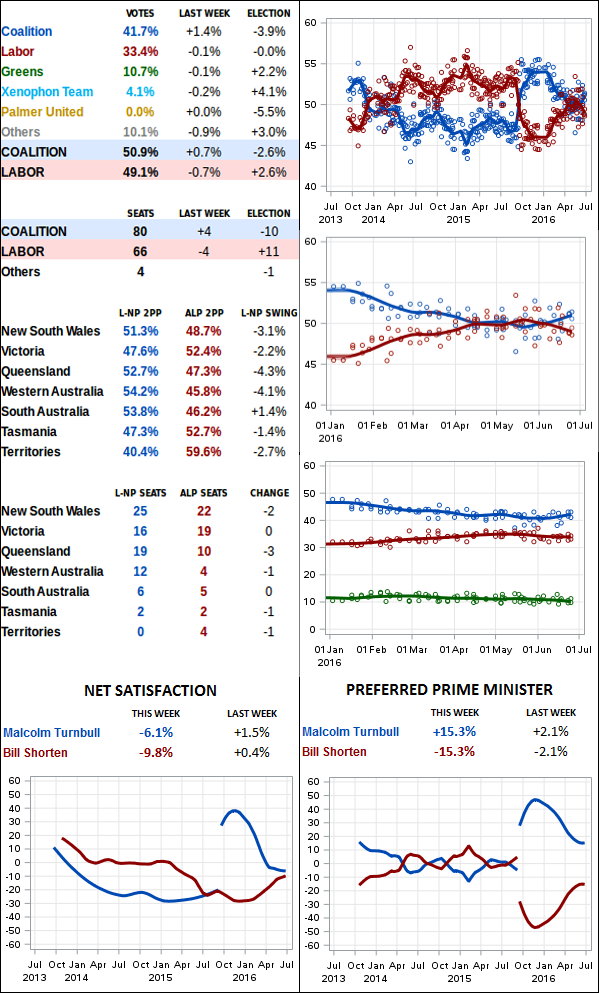 With the non-major party vote up 3.6% off an already high base in 2013, a lot depends on the accuracy of the assumption that preferences will flow as they did in 2013. Labor did particularly well on Greens preferences at the last election, and seem unlikely to improve upon that performance this time, but the preferences of “others”, who are treated as a homogenous blob, are something of a wild card, given the effective disappearance of Palmer United – although Palmer United preferences behaved almost identically to the remainder of the “others” preferences (i.e. everyone but Palmer United and the Greens) in 2013. The alternative approach is to go off respondent-allocated preferences, as published by Ipsos, ReachTEL and Morgan (which regrettably stopped publishing national polling results during the campaign), although the previous election method has generally worked better except when there were very substantial changes in the make-up of the non-major party vote. The following chart shows how the Coalition’s share of respondent-allocated preferences has trended since the last election, with the yellow line indicating where it was in 2013: 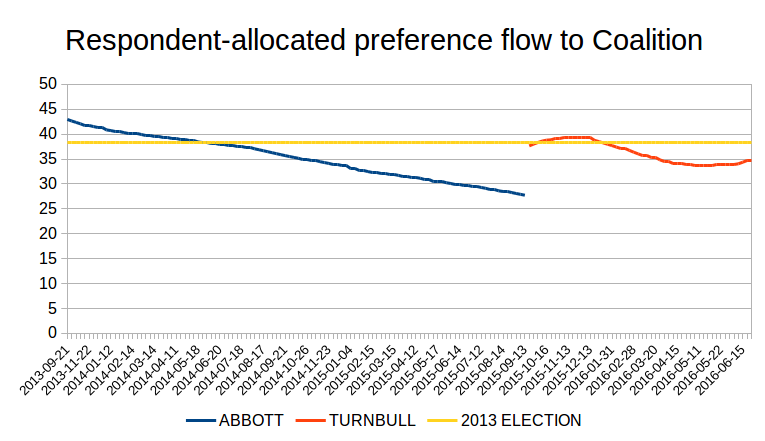 In other words, Tony Abbott had a remarkably consistent downward trajectory, whereas under Malcolm Turnbull it has broadly reflected the government’s overall standing in the polls. It nonetheless ends the campaign 3.7% below the 2013 election figure, which under the circumstances would make a fairly substantial difference, bringing the Coalition’s two-party preferred down to 50.3% and making as much as four seats’ difference on the seat projection.

The next chart tracks the Coalition vote state-by-state since the dawn of the Turnbull era. The most interesting point to emerge is that the Coalition has recovered strongly in Western Australia after appearing in a dire position there at the start of the campaign, possibly because the campaign has focused minds on the federal sphere and away from their discontent with the Barnett government. There has also been an upward trajectory in South Australia, but the static there from the Nick Xenophon Team is such that this should be treated with great caution. Tasmania also seems to have gone its own way over recent weeks, in this case in favour of Labor, although the small sample sizes here are such that this should be treated with caution as well. Elsewhere, the situation seems to have been fairly stable through the course of the campaign. 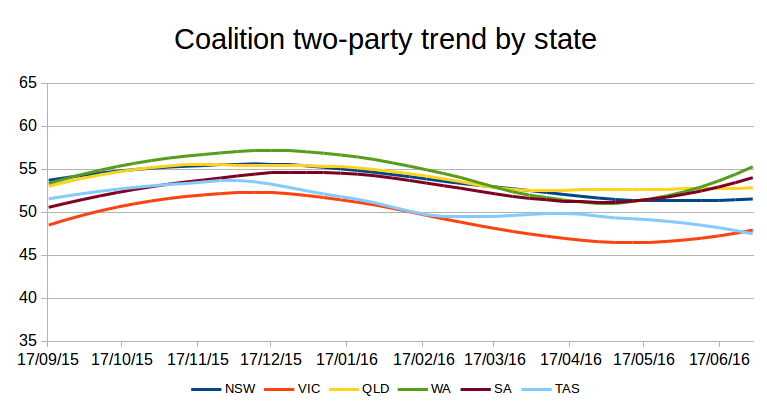 Now to polls. For starters, I’ve assembled all of the seat polling from the campaign that I’m aware of on a spreadsheet which (I think) you can access here.

The final Newspoll of the campaign was conducted Tuesday to Friday from a bumper sample of 4135, and records the Coalition with a 50.5-49.5 lead on two-party preferred, from primary votes of Coalition 42% (down one on last week), Labor 35% (also down one) and Greens 10% (up one). Malcolm Turnbull is up three on approval to 40% and down four on disapproval to 47%, while Bill Shorten is up one on both measures to 36% and 51%. Turnbull’s lead as preferred prime minister is 48-31, up from 45-30.

ReachTEL’s final national poll for the campaign is unchanged on last week at 51-49 in favour of the Coalition on respondent-allocated preferences, although previous election preferences would produce the same result. The forced preference primary votes are Coalition 42.8% (up 0.4%), Labor 34.6% (up 0.8%), Greens 10.7% (up 0.2%). Despite this, and contrary to Newspoll, Shorten’s personal ratings have strengthened and Turnbull’s have weakened. Shorten records his best result yet against Malcolm Turnbull as preferred prime minister, with the latter now leading 52.9-47.1 compared with 57.9-42.1 last week. Turnbull’s combined good and very good rating is down 2.3% to 31.2%, and his combined poor and very poor is up 3.6% to 36.9%, whereas Shorten is respectively up 4.1% to 34.8% and up 0.8% to 38.6%. The survey of 2084 respondents was conducted last night for the Seven Network.

Essential Research has published a special pre-election poll conducted Monday to Thursday, compared with its usual field work period of Thursday to Sunday, which has the Coalition on 42.5%, Labor on 34.5% and Greens on 11.5%. The numbers have been published to the nearest 0.5% because, Essential advises, “nearly all the figures came out very close to the .5”. These are quite substantial shifts when compared with the fortnightly rolling average published on Tuesday, which were Coalition 39%, Labor 37% and Greens 10%, but less so going off the hitherto unpublished result from just last week’s sample, which was Coalition 40%, Labor 36% and Greens 10%. The result is also broken down into results for those who have and have not yet voted, with the former (Coalition 45%, Labor 33%, Greens 10%) more favourable to the Coalition than the latter (Coalition 41%, Labor 35%, Greens 12%). The two-party preferred results are 50.5-49.5 to the Coalition overall, 54-46 among those who have already voted, and 51-49 to Labor among those planning on voting tomorrow. Thirty-eight per cent say Malcolm Turnbull and the Liberals ran the better campaign compared with 29% for Bill Shorten and Labor, and 48% expect the Coalition to win compared with 21% for Labor. The poll also finds 14% saying Brexit will be good for the Australian economy, 26% bad and 34% makes no difference, and 15% saying it will make them more likely to vote Liberal, 11% more likely to vote Labor, and 64% makes no difference.

The weekly ReachTEL marginal seat poll is from the Labor-held Melbourne seat of Chisholm, where Labor has been weakened by the retirement of sitting member Anna Burke, and perhaps further by the Country Fire Authority issue. The poll finds Labor hanging on by a margin of 51-49, from primary votes of Liberal 41.5% (down 2.6% on the 2013 election), Labor 37.7% (up 1.8%) and Greens 15.1% (up 5.6%). The closeness of the two-party headline is down to a much stronger flow of preferences to the Liberals compared with 2013. If previous election preference flows are applied, the Labor lead is 54-46. The poll was conducted last night from a sample of 627.