Pre-election High Court action, reports of a Labor surge in the Melbourne seat of Dunkley, Labor’s candidate crisis in Fremantle, and a closer look at Labor’s now-finalised Senate tickets.

Noteworthy developments since my last federal election post 24 hours ago:

• Ahead of the High Court’s ruling on Senator Bob Day’s challenge to the constitutionality of Senate electoral reform, to be delivered at 10am today, Jeremy Gans at the University of Melbourne portends its rejection. Gans notes the court has failed to issue orders in advance of written reasons, as it likely would have done if its ruling was anything the Australian Electoral Commission needed to know about.

• Another, less publicised election-related High Court challenge met an unsuccessful conclusion last night, with the rejection of a bid to keep the electoral roll open beyond its scheduled close of 8pm on Monday. The challenge sought to build on the High Court’s ruling during the 2010 campaign which invalidated Howard-era amendments that closed the roll to new enrolments on the evening the writs were issued, and to updating of addresses three days subsequently.

• A report by Rick Wallace of The Australian talks up Labor’s prospects in the Liberal-held outer Melbourne seat of Dunkley. The seat is being vacated with the retirement of Liberal member Bruce Billson, who narrowly retained it through the Rudd-Gillard years and bequeaths a 5.6% margin to the new Liberal candidate, Chris Crewther. According to Labor sources cited in the report, “one recent sample of a tracking poll in the southeast Melbourne seat had the ALP in front 52-48 per cent after preferences” – though based on what I know of tracking polling, the sample in question would have been about 200. Nonetheless, the Prime Minister is taking the seat seriously enough that he campaigned there yesterday. Notwithstanding Labor’s apparently strong show in this seat, the report also relates that concerns remain about the Melbourne seats of Chisholm and Bruce, where Labor is losing sitting members with the retirements of Anna Burke and Alan Griffin.

• The Australian’s report also says the Nationals are “increasingly optimistic” that their candidate for the seat of Murray, state upper house MP Damian Drum, will win the rural seat of Murray, which is being vacated with the retirement of Liberal member Sharman Stone. However, Labor is said to be dangling a carrot before the Liberals by offering to direct preferences to their candidate ahead of Drum, in exchange for the Liberals dropping their plans to preference the Greens ahead of Labor in the inner northern Melbourne seat of Wills.

• Labor has a new candidate for Fremantle following the disendorsement of Maritime Union of Australia organiser Chris Brown, who failed to disclose past convictions on his candidate nomination form. The national executive convened yesterday to replace him with Josh Wilson, deputy mayor of Fremantle and a staffer for the seat’s outgoing member, Melissa Parke. Brown won the initial preselection through the support of the Left unions on the party’s state executive, despite Wilson defeating him by a 155-110 margin in the ballot of the local membership. On Tuesday it emerged that Brown had spent convictions dating from his late teenage years for assaulting a police officer and driving under the influence. Brown claims to have raised the matter with party officials in April, only to be told spent convictions did not have to be disclosed (although the question on the nomination form is whether the prospective candidate has “ever been found guilty of any offence”). He also claimed his contact with the police officer arose accidentally while he was defending himself from an unprovoked attack by three assailants, and said the court had recognised mitigating circumstances when it gave him a good behaviour bond. I had a lot more to say about this in a paywalled article in Crikey today. One of the issues dealt with was the notion that Labor’s troubles might cause the seat to fall to the Greens, despite their modest 11.9% share of the vote in 2013. While the Greens were sufficiently strong in the immediate vicinity of Fremantle to win the state seat at a by-election in 2009, support for the party is a good deal lower on those parts of the federal electorate not covered by the state seat. This is indicated by the map below, which shows federal boundaries in red and state boundaries in blue, with numbers indicating polling booth locations and the Greens primary vote. 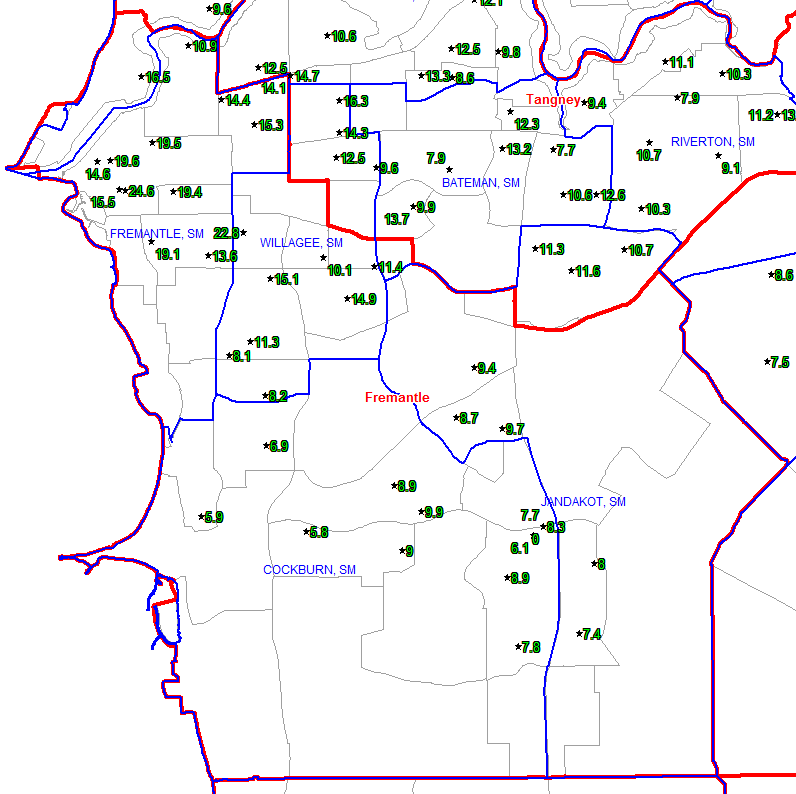 • Labor’s national executive has signed off on its Senate preselections today, capping a process that has produced two particularly contentious outcomes: the return of Don Farrell in second position in South Australia, and the sixth placing given to incumbent Lisa Singh in Tasmania. In turn:

New South Wales: 1. Sam Dastyari (Right), factional powerbroker and former general secretary of the state party branch, who filled the casual vacancy created when his predecessor as general secretary, Matt Thistlethwaite, moved to the lower house seat of Kingsford Smith at the 2013 election; 2. Jenny McAllister (Left), former party national president and technical director of a civil engineering firm, who came to the Senate in May last year in place of John Faulkner; 3. Deborah O’Neill (Right), member for the Central Coast seat of Robertson from 2010 until her defeat in 2013, who filled Bob Carr’s Senate vacancy in November 2013; 4. Doug Cameron (Left), former Australian Manufacturing Workers Union national secretary who was elected from number two in 2007 and 2013; 5. Tara Moriarty (Right), state secretary of United Voice.

Victoria: 1. Kim Carr (Left), leading figure in the Victorian Left, elected from number two in 1993 and 1998, and number one in 2004 and 2010; 2. Stephen Conroy (Right), an ally of Bill Shorten’s in the dominant sub-faction of the Victorian Right, who filled a casual vacancy in 1996, held top position in 1998, then second position in 2004 and 2010; 3. Jacinta Collins (Right), a former official with the Shop Distributive and Allied Employees Association who entered the Senate in 1995, lost her seat from the number three position at the 2004 election after the party’s preference deal with Family First backfired (ironically, given her renown as a social conservative), won it back from top position in 2007, and held second position in 2013; 4. Gavin Marshall (Left), former Electrical Trades Union official who entered the Senate in 2002, and had top position in 2013; 5. Jennifer Yang (unaligned), scientist and former mayor of Manningham who unsuccessfully sought preselection for the lower house seat of Chisholm, and ran for the state seat of Mount Waverley in 2014; 6. Louise Persse (Left, I assume), former national secretary of the Community and Public Sector Union.

Queensland: 1. Murray Watt (Left), Maurice Blackburn lawyer and state member for Everton from 2009 until his defeat in the cleanout of 2012, who last year defeated incumbent Jan McLucas to win the Left’s endorsement for top position on the half-Senate ticket; 2. Anthony Chisholm (Right), former party state secretary who last year won Right endorsement to succeed Joe Ludwig after he announced he would not seek another term; 3. Claire Moore (Left), who was first elected in 2001 and held second position on the ticket in 2001, 2007 and 2013; 4. Chris Ketter (Right), former state secretary of the Shop Distributive and Allied Employees Association, who was first elected from top of the ticket in 2013; 5. Jane Casey, who I can’t tell you much about, except that she’s fron Mackay.

Western Australia: 1. Sue Lines (Left), former assistant national secretary of United Voice, who filled Chris Evans’ Senate vacancy in May 2013; 2. Glenn Sterle (Right), former Transport Workers Union organiser, elected from number two in 2004 and 2010; 3. Pat Dodson (unaligned), indigenous leader and former Roman Catholic priest, anointed by Bill Shorten to fill Joe Bullock’s Senate vacancy in March, which he eventually filled a fortnight ago; 4. Louise Pratt (Left), state upper house member from 2001 and 2007, elected to the Senate from top of the ticket in 2007, then relegated to what proved to be the losing proposition of number two in 2013; 5. Mark Reed (Left), director of campaigns and communications at United Voice.

South Australia: 1. Penny Wong (Left), the Leader of the Opposition in the Senate, first elected from top of the ticket in 2001, relegated to number two in 2007, and promoted to number one only after a backlash against Don Farrell’s initial preselection win in 2013; 2. Don Farrell (Right), former state secretary and national president of the Shop Distributive and Allied Employees Union, elected to the Senate from number one in 2007, then voluntarily bumped to number two in 2013 (see above), from which he was unexpectedly defeated; 3. Alex Gallacher (Right), former state secretary of the Transport Workers Union, elected from top of the ticket in 2010; 4. Anne McEwen (Left), former state secretary of the Australian Services Union, elected from number on 2004, re-elected from number two in 2010, and now shunted to number four to accommodate Farrell; 5. Michael Allison (not known), network controller for SA Power Networks and delegate for the Communications Electrical and Plumbing Union.

Australian Capital Territory: 1. Katy Gallagher (Left), the territory’s Chief Minister from 2011 until her resignation in 2014, when she resigned pending her transfer to Senate in March 2015 on the retirement of Kate Lundy.

Northern Territory: 1. Nova Peris, former Olympic hockey player and sprinter, who was installed as candidate at the 2013 on the insistence of then Prime Minister Julia Gillard at the expense of the incumbent, Trish Crossin.

862 comments on “Highlights of days three and four”