The official start of the election campaign has been marked by three new polls confirming the impression of a very tight race.

• In The Australian, Newspoll records a 51-49 lead to Labor, unchanged on the last result three weeks ago, from primary votes of Coalition 41% (steady), Labor 37% (up one) and Greens 11% (steady). Malcolm Turnbull is on 38% approval (up two) and 49% disapproval (steady), with Bill Shorten respectively on 33% (up two) and 52% (steady). Turnbull’s lead as preferred prime minister is 49-27, little changed on the 47-28 result last time. The poll was conducted Thursday to Sunday from a sample of about 1739. Hat tip: James J in comments.

• In the Fairfax papers, Ipsos goes the other way, with a 51-49 lead to the Coalition after a 50-50 result three weeks ago. The Coalition is up two on the primary vote to 44%, with Labor and the Greens steady on 33% and 14%. Despite that, there’s been a big improvement in Bill Shorten’s personal ratings, his approval up five to 38% and disapproval down six to 49%. Turnbull’s ratings, which have been markedly better from Ipsos than Newspoll, have him down three on approval to 48%, and up two on disapproval to 40%. The poll also found the budget to be deemed fair by 37% and unfair by 43%, which compares with 52% and 33% after last year’s budget, and 33% and 63% after the disaster the year before (when the series was conducted by Nielsen rather than Ipsos). Fifty-three per cent of respondents expected the Coalition would win the election, compared with 24% for Labor.

• News Corp’s Sunday tabloids also had a Galaxy poll overnight that had the result at 50-50, from primary votes of Coalition 42%, Labor 36% and Greens 11%. While the Newspoll and Galaxy result both come from the same firm and involved a combination of online and phone polling, the phone polling for the Galaxy result was, I believe, live interview rather than automated. The Galaxy also found low recognition of Scott Morrison as Treasurer (48%) and Chris Bowen as Shadow Treasurer (18%), and had a few attidinal questions whose wording Labor wouldn’t have minded: “Do you consider it fair or unfair that only workers earning more than $80,000 a year got a tax cut in the budget?”, recording 28% for fair and 62% for unfair, and “do you support or oppose Labor’s plan to leave the deficit levy in place so that workers earning over $180,000 a year pay more tax?”, which got 63% for support and 21% for oppose. The poll was conducted Wednesday to Friday from a sample of 1270.

I’ll be running all that through the Bludgermator a little later to produce BludgerTrack projections, so watch this space.

UPDATE: BludgerTrack has had a feel of the four new opinion polls and found them to be, if not exactly budget bouncy, then tending to ameliorate what was probably an excessively favourable reading for Labor last week. The Coalition is now credited with having its nose in front on two-party preferred, assisted by a ReachTEL result that was better for them than the headline figure of 50-50 made it appear. That was based on respondent-allocated preferences, but on 2013 election preferences it comes out as 51.6-48.4. I don’t have any state data from the latest round of polls, so the state relativities are unchanged from last week’s result. The seat projection has the Coalition clearly back in majority government territory after making one gain apiece in New South Wales, Queensland, Western Australia and Tasmania. Note that primary vote and two-party charts are now featured below going back to the start of the year, with a further two-party chart continuing to show progress since the start of the term. Three polls have provided new leadership ratings, including the Morgan poll together with Newspoll and Ipsos. The trend results suggest Malcolm Turnbull’s downward plunge might at least be levelling off, but an improvement for Bill Shorten that can be traced back to the start of the year is, if anything, gaining momentum. 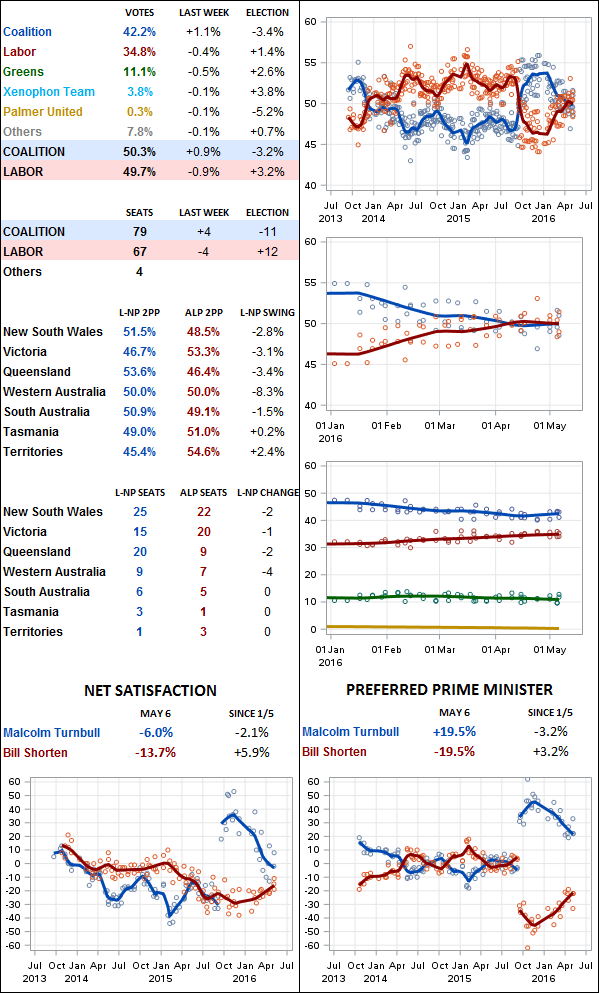