The BludgerTrack poll aggregate continued to inch its way in favour of Labor in the lead-up to Tuesday night’s budget.

There was a pre-budget lull in the federal polling storm this week, but the BludgerTrack aggregate has nonetheless had the regularly scheduled Roy Morgan and Essential Research results to play with. Both recorded next to no change on last time, and the changes on all indicators of voting intention have been barely measurable. Despite that, the seat projection has Labor up one in New South Wales, Tasmania and Western Australia (the results in the latter being particularly remarkable at present), but down two on the back of a very small voting intention shift in highly sensitive Queensland. Last week I reported that I was going to start counting Fairfax as a Liberal National Party seat, so today’s announcement by Clive Palmer that he would not be recontesting the seat was very timely. The result is that the Coalition is down one seat on last week rather than two, and “others” is now recorded as four seats rather than five. Nothing new this week in the way of leadership ratings. 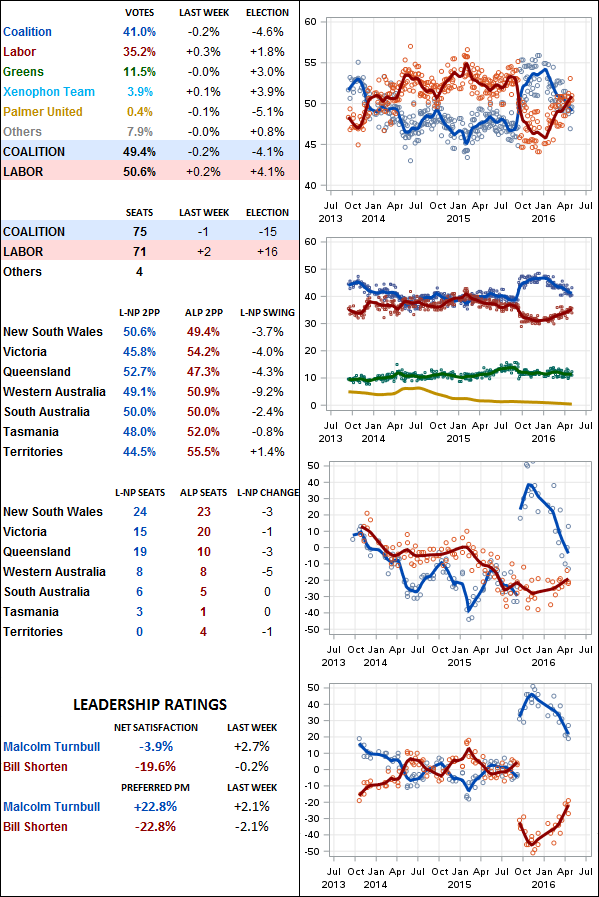 • Liberal MP Ann Sudmalis has had her preselection confirmed for her south coast New South Wales seat of Gilmore, after suggestions she faced a moderate-backed challenge arising from her perceived public criticism of the Baird government over council amalgamations. The Prime Minister had made it known that he did not wish for any move against Sudmalis to proceed, out of concern at factional tensions being stoked ahead of the election. Two state Liberals, Kiama MP Gareth Ward and Bega MP Andrew Constance, are reportedly eyeing the succession to Sudmalis in 2019. You can read a lot more about this electorate in yesterday’s Seat du jour.

• The Liberal Party’s trial preselection plebiscite of party members in Parramatta has been won by Michael Beckwith, development operations manager for Lend Lease. The other candidates were Jean Pierre Abood, a Parramatta councillor; Charles Camenzuli, a structural engineer and building consultant who ran in 2010; Maroun Draybi, a local solicitor and hardline conservative; and Felicity Finlay, a school teacher. You can view the recent Seat du jour entry on Parramatta here.

• The Liberals have preselected Yvonne Keane, deputy mayor of The Hills Shire and former television presenter, for the western Sydney seat of Greenway. Keane was also a preselection aspirant in 2013, but the numbers were sewn up by the power bloc of Blacktown councillor Jess Diaz on behalf of his son, Jaymes Diaz. Following a disastrous campaign, Diaz suffered a 2.1% swing in favour of Labor incumbent Michelle Rowland in this highly marginal seat. Step this way for today’s Seat du jour entry on the seat.

• The Nationals preselection to replacing the retiring John Cobb in Calare has been won by Andrew Gee, the state member for Orange, ahead of Orange councillor Scott Munro, Wellington councillor Alison Conn and Bathurst businessman Sam Farraway.

• John Hassell, Pingelly grain farmer and CBH Board director, is the Nationals candidate for the regional Western Australian seat of O’Connor, which was won for the party by Tony Crook from Liberal veteran Wilson Tuckey in 2010, then lost to Rick Wilson of the Liberals when Crook bowed out after a single term in 2013. Hassell has pledged to serve as an “independent WA National” if elected.

• The Canberra Times reports that the Liberals have endorsed candidates for the two seats in the Australian Capital Territory: Livestock and Bulk Carriers Association director Robert Gunning in Fenner, and lawyer Jessica Adelan-Langford in Canberra.