It’s now been four weeks since the last poll showing the Coalition in the lead, and Labor has now poked its nose in front on the BludgerTrack aggregate’s two-party preferred measure.

The only new poll this week was the weekly Essential Research, owing to the poll glut last week and the Anzac Day public holiday on Monday. The Essential result was an eye-opener, with the normally sedate series lurching two points in favour of Labor, who have opened up a 52-48 lead. The primary votes are Coalition 40% (down two), Labor 39% (up three) and Greens 10% (down one). Other questions found 40% approving of a double dissolution election, up one from two weeks ago, with opposition up four to 28%; 42% expecting the Coalition to win compared with 28% for Labor; 35% saying Malcolm Turnbull’s leadership has made them more likely to vote Coalition, compared with 23% for less likely; and 67% saying they would view their vote as one in favour of the party they supported, compared with 21% saying it would be against the party they opposed. On next week’s budget, respondents anticipated it would be good for business and the well off, bad for everyone else, and neutral for the economy overall. The poll also found that 45% would sooner see Helen Clark as secretary-general of the United Nations compared with 21% for Kevin Rudd.

Single Essential Research results tend not to knock the BludgerTrack poll aggregate off its axis, but this result was forceful enough to drive a half-point shift on two-party preferred, which tips the balance in favour of Labor. However, the gains from last week to this have tended to be concentrated in states where they are of little use to Labor on the seat projection, which only ticks one point in their favour through a gain in New South Wales, leaving the Coalition with the barest possible absolute majority. That would be a little less bare if I started crediting Clive Palmer’s seat of Fairfax as a Liberal National Party gain, which I really should have been doing since a Galaxy poll of the seat in January credited Palmer with 2% of the vote. I’ll implement that one next week. Nothing new this week on the leadership ratings. 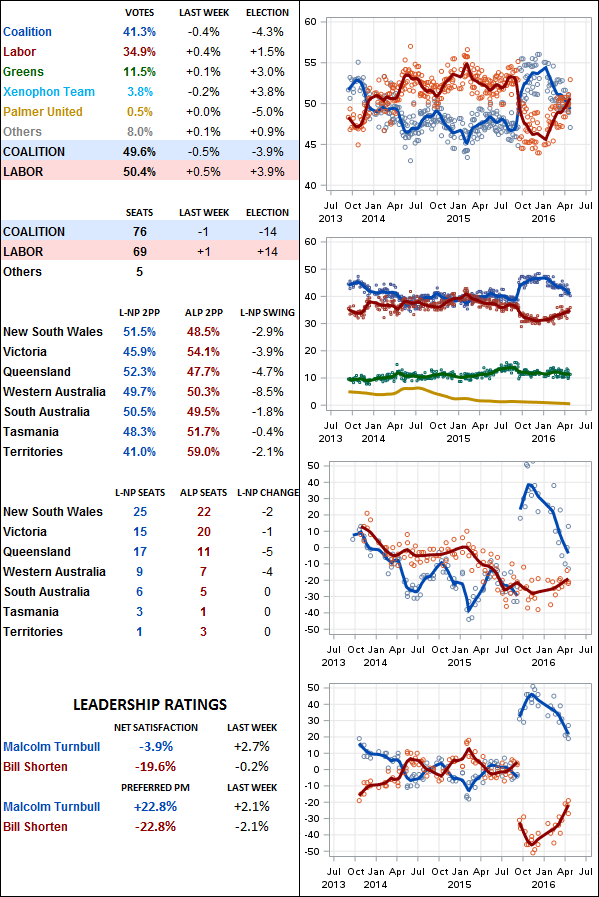 • The WA Liberal Party’s state council has endorsed Matt O’Sullivan as the party’s candidate for the new seat of Burt in the southern suburbs of Perth, formalising its overturning of a local party ballot three weeks ago. O’Sullivan is closely identified with mining magnate Andrew Forrest, as the chief operating officer of his GenerationOne indigenous youth employment scheme. The earlier ballot was won by Liz Storer, a Gosnells councillor who had backing from the Christian Right. Storer defeated O’Sullivan with 13 votes out of an eligible 25, but the state council ruled three weeks ago that the number of preselectors was insufficient, and that it would take matters into its own hands.

• The Central Western Daily lists four candidates for Saturday’s Nationals preselection in the rural New South Wales seat of Calare, to be vacated at the election by John Cobb: Andrew Gee, the state member for Orange; Alison Conn, a Wellington councillor; Sam Farraway, owner of the Hertz franchise in Bathurst; and Scott Munro, a butcher and Orange councillor.

• The Blue Mountains Gazette last week reported that a ReachTEL poll conducted on April 19 for the NSW Teachers Federation had Liberal and Labor tied in the Blue Mountains seat of Macquarie, which Louise Markus holds for the Liberals on a margin of 4.5%. Markus has secured the Liberal preselection for the seat after the withdrawal of a challenge by Sarah Richards, a local party branch president.

• It escaped my notice four weeks ago that The Australian had ReachTEL results commissioned by the Australian Manufacturing Workers Union from the Liberal-held Adelaide seats of Hindmarsh and Sturt. Results in the report are incomplete, but they appear to credit Christopher Pyne with a 5% margin in Sturt, down from 10.1% at the 2013 election, and also have the Liberals leading in the difficult seat of Hindmarsh. Only modest support was recorded for the Nick Xenophon Team, at 14.5% and 11% before exclusion of the undecided. A good deal has happened in the month since the poll was conducted, with Coalition support continuing to plummet nationally, and the government this week seeking to staunch the flow in South Australia specifically by committing to have the $52 billion submarine construction project built in the state. I have also obtained ReachTEL polling conducted early last month for The Australia Institute, which has the Nick Xenophon Team’s support in South Australia at 16.1% in the House of Representatives and 24.8% in the Senate – keeping in mind that polls like this have form in overstating the distinctions between House and Senate results (or at least, they did before the Senate vote went haywire in 2013). There are also Queensland results inclusive of the parties of Clive Palmer, Glen Lazarus, Nick Xenophon and Jacqui Lambie, which have their Senate support ranging from 1.6% (Lambie) to 3.4% (Xenophon).