Two weeks out from polling day, Newspoll provides further evidence that the South Australian Liberals are headed for a solid win. UPDATE: And now a Galaxy poll with a 50-50 result in the marginal seat of Colton …

The Australian reports that a Newspoll survey of 1100 respondents is consistent with the tenor of other pre-election polling in giving the Liberals a decisive 54-46 lead on two-party preferred, from primary votes of 44% for the Liberals, 34% for Labor and 7% for the Greens. Personal ratings contain further ominous signs for Labor, with Steven Marshall effectively catching up with Jay Weatherill on the preferred premier measure (Weatherill leads, but only by 40-39), and Weatherill recording a negative net approval rating for the first time (43% approval and 44% disapproval). Marshall records 45% approval and 29% disapproval. The Australian also reports the poll shows most respondents saying there is no chance they will change their vote, and an overwhelming expectation that the Liberals will win.

In other news, this week also saw the closure of nominations and ballot paper draws. The Poll Bludger election guide has accordingly been updated with full candidate lists in ballot paper order. Upper house above-the-line preference tickets have also been lodged, and can be perused at the Electoral Commission website.

UPDATE: And now the Sunday Mail brings us a Galaxy automated phone poll of 495 respondents from the key western suburbs marginal of Colton which, somewhat encouragingly for Labor, has the result at 50-50. GhostWhoVotes has posted the paper’s graphic, which suggests Labor’s Paul Caica to be a popular local member: 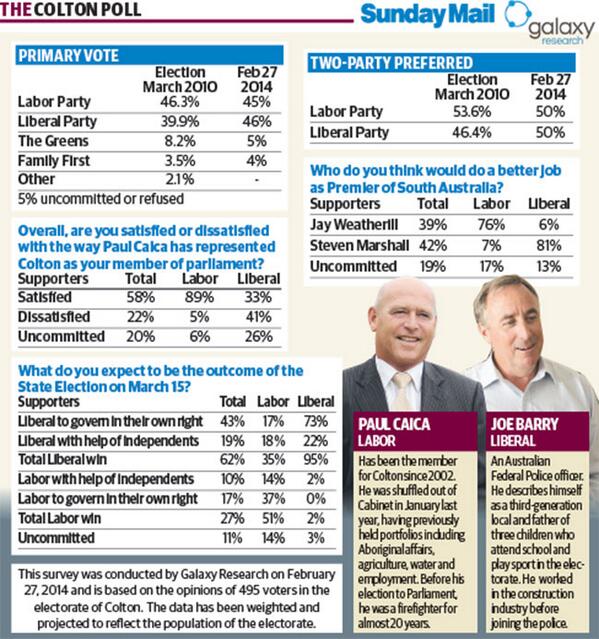