A detailed projection of how things might play out when the button is eventually pressed on the Senate election counts.

After having nothing to say about the Senate count since election night, I now finally break the drought with the following analysis of results that will not be finalised for at least another three weeks. This is based on the current party vote shares from the count, which is lagging about 10% behind that for the House of Representatives, and preference flows from the 2019 election. The latter makes use of the ballot paper data files published by the Australian Electoral Commission, recording every voter’s full order of preference numbering.

The last seats are generally thought to be in doubt in three states: Victoria, which could provide either a third seat for Labor or the Coalition, or the only seat in the parliament for the United Australia Party; Queensland, where the last seat is down to Pauline Hanson or a third seat for the Coalition, the early excitement about Legalise Cannabis’s prospects having faded; and South Australia, which could provide a third seat to either Labor or Liberal or a seat for One Nation. My analysis leads me to conclude that the outcome of these races will be third seats for the Liberals in Victoria and South Australia, and Pauline Hanson will prevail in Queensland.

The full accounting of my projections can be found on this spreadsheet, with one sheet for each state. A bit of creative thinking will be required to ascertain exactly what I’m up to here: exclusions proceed horizontally across the top of the page, grouped together in four columns recording the flow of preferences based on 2019 (depending on the size of the state, I’ve sampled every tenth or fifth ballot paper or used the whole lot), followed by the size of the transfers and the projected totals from the relevant point in the count. Parties disappear beyond the point where they cross the threshold of a 14.3% quota. Only in the case of the Greens in South Australia did I think an elected candidate’s surplus big enough to warrant the trouble of transferring.

To summarise the situation in turn:

The Coalition and Labor win two seats each off the bat, with the Greens close enough that they get there with 41.4% of Animal Justice preferences, 29.3% from Legalise Cannabis and 36.2% from sundry left-wing minor parties. The third Coalition candidate, Jim Molan, starts the race for the final seat with 8.5% to One Nation’s 4.2%, which widens slightly by the end of the count to 12.9% to 8.4%.

As it stands, my model has the Coalition and Labor with two seats each right off the bat and the Greens close enough to one that small left-wing party preferences are enough to get them over the line. The race for the final seat starts with the Coalition’s number three on 4.2%, the United Australia Party on 4.0% and Labor’s number three on 3.3%. The UAP drop out after everyone else is excluded, at which point the third Liberal, Greg Mirabella, is on 8.1%, Labor’s number three, Casey Nunn, is on 7.5% and the UAP are on 6.7%. The preferences of the latter and all who fed into them then get Mirabella ahead by 10.8% to 8.5%.

However, it might be argued that the increase of the UAP primary vote from 2.5% to 4.0% will be matched by an increase in preference flows, such that my method of projecting 2019 flows on to the result is short-changing them. For this reason, my final columns show “Scenario 1”, outlined above, and “Scenario 2” which puts the UAP ahead before the final count. This doesn’t look all that promising for the UAP either, showing Mirabella prevailing over the UAP candidate by 9.9% to 7.3%. However, this doesn’t completely resolve the issue, as here too flows to the UAP may be being underestimated.

The Coalition wins two quotas off the bat and Labor one, with the Greens close enough that they get there round about the point where Clive Palmer and Campbell Newman are excluded. Next out are Legalise Cannabis, from whom Labor get enough preferences to push their second candidate, Anthony Chisholm, to a quota. This just leaves Pauline Hanson and the third Liberal National Party candidate, Amanda Stoker, in the race for the last seat, which Hanson wins by 12.1% to 10.8%.

As in Victoria, Liberal and Labor get two quotas off the bat and the Greens start close enough to get over the line on the preferences of minor candidates. One Nation are the last minor party standing when the count whittles it down to the third Labor and Liberal candidates, at which point I have them dropping out with 6.5% to the Liberals’ 7.4%. By that time though Labor is on 10.7%, which is too far ahead for the Liberals to close the gap with the One Nation’s exclusion, suggesting Labor’s Fatima Payman should become the first Senator ever elected from third on Labor’s Western Australian ticket at a six-seat election.

Here too, Liberal and Labor both elect two Senators off the bat; the Greens do it a little less comfortably off an 11.9% primary vote, but 50.0% of Animal Justice and 40.3% of Legalise Cannabis preferences push them over the line. In the race for the final seat, One Nation drops out with 6.8% to the Liberals’ 9.0% and Labor’s 7.1%, after which the third Liberal, Kerrynne Liddle, makes it home by 10.9% to 9.0%.

The Liberals win two quotas off the bat and the Greens win one, while Labor falls slightly short of a second quota but get there soon enough as minor candidates are excluded. By that point the Jacqui Lambie Network has grown from a base of 8.4% to 10.8%, which shortly grows to a quota off One Nation and other preferences. The defeated third Liberal is Eric Abetz; I have heard nothing to suggest his below-the-line campaign will overturn the order of election from the Liberal ticket.

I am in no doubt that independent David Pocock will unseat Liberal Senator Zed Seselja in the Australian Capital Territory, or that the Northern Territory will deliver its usual result of one seat apiece. Assuming I’m right about everything else, Labor and the Greens will have half the numbers between them, and be able to pass contested legislation with the help of either Pocock or the two Jacqui Lambie Network Senators. 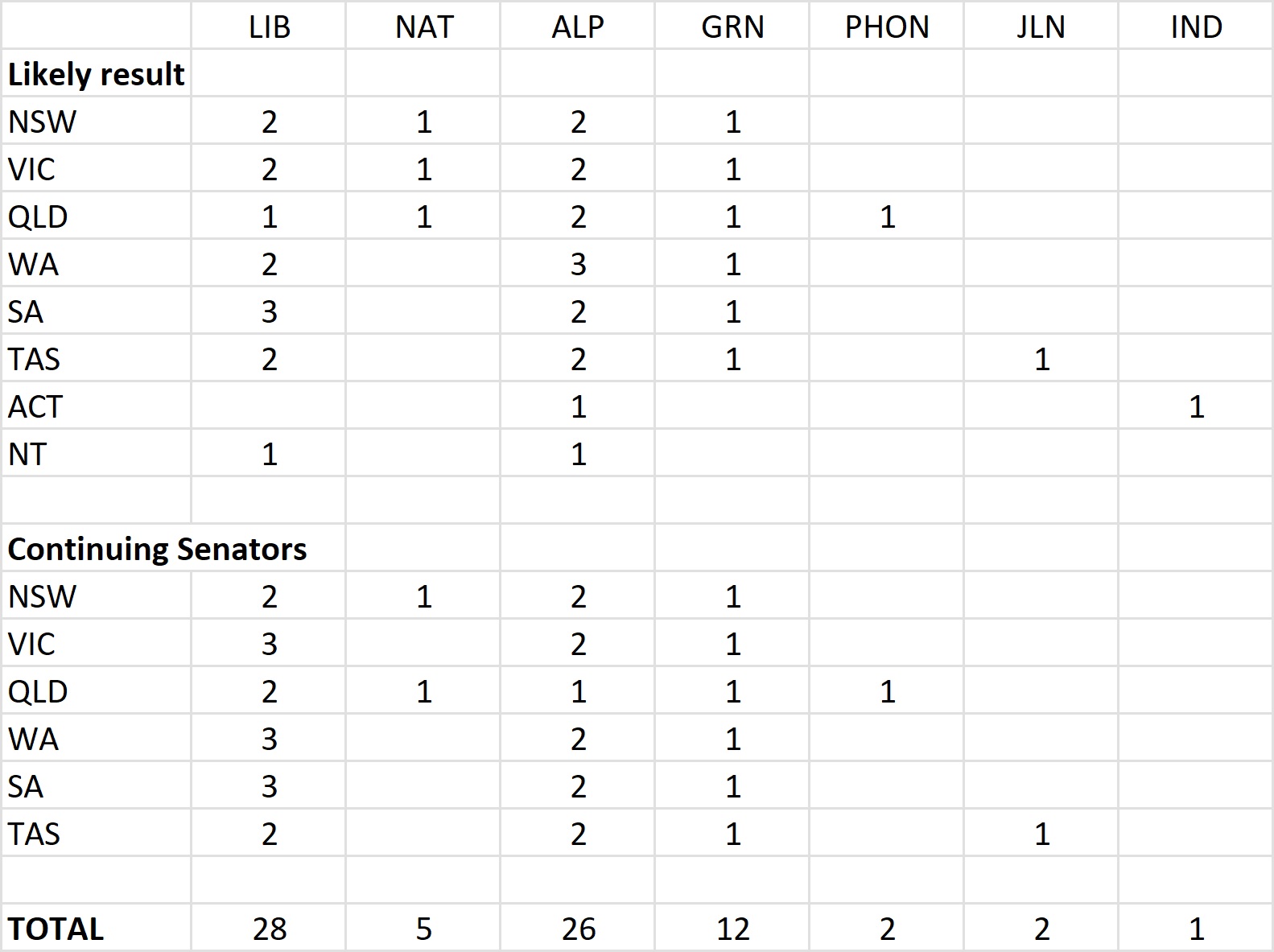 43 comments on “Projecting the Senate”