A deep dive into proposed new federal electoral boundaries for Victoria, which gains a seat, and WA, which loses one.

This post will be extensively updated throughout the day to analyse the new draft federal boundaries for Victoria and Western Australia. My quick and dirty first go at estimating the margins and party shares are featured below; here are Antony Green’s; here are Ben Raue’s.

Cowan. The gains from Stirling, which include Balcatta, Balga, Mirrabooka and northern Dianella, are balanced by extensive losses in the north, most of them to Pearce. This adds a useful 0.5% to Anne Aly’s narrow margin.

Pearce. Becomes a lot more urban, losing Lancelin and the Avon Valley to Durack and gaining Wanneroo, Wangara and Landsdale from Cowan (although it also loses Ellenbrook to Hasluck). All of which reduces Christian Porter’s margin from 6.7% to 5.5%.

Hasluck. Gains the new urban development around Ellenbrook and nearby Swan Valley territory from Pearce, which boosts the Liberal margin from 4.6% to 5.9%.

Swan. Gains Forrestfield from Hasluck; loses Kenwick to Burt; the Liberal margin is up from 1.7% to 3.3%. 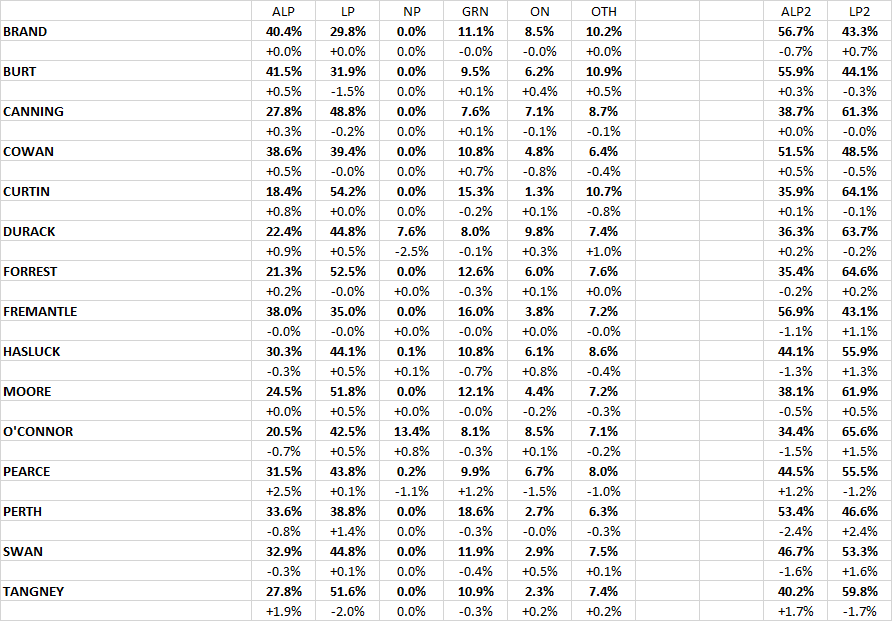 The new seat of Hawke is on Melbourne’s north-western fringes, and is pretty safe for Labor with a margin of 9.8%. Corangamite, which has existed with that name since federation, is now called Tucker, the lake from which it takes its name having gone from the electorate as the urbanisation of Geelong has pulled it eastward.

Hawke. The new seat encompasses Sunbury, formerly in McEwen; extends westwards from there into Melton, formerly in Gorton; and further west still into Bacchus Marsh and Ballan, formerly in Ballarat.

Bruce. Labor’s Julian Hill has his margin cut from 14.2% to 6.9% as Noble Park gets transferred to Hotham in the west, and it gains northern Berwick in the east from La Trobe.

Hotham. Correspondingly, the gain of Noble Park boosts Clare O’Neil in Hotham from 5.9% to 11.1%, further aided by the loss of the southern end of Mount Waverley and Glen Waverley to Chisholm.

Chisholm. And Chisholm in turn loses territory at its northern end, around Box Hill North and western Forest Hill, to balance the loss to Hotham — the changes affecting around a third of its voters. I’m a little perturbed by the fact that Antony Green and Ben Raue are in agreement that this cuts the Liberal margin from 0.6% to 0.2% whereas I have it up to 0.8%.

La Trobe. The loss of northern Berwick to Bruce is balanced by semi-rural territory in the south-east, including Westernport Bay around Koo Wee Rup, which boosts the Liberals from 4.5% to 5.3% in an historically important marginal seat.

Tucker. This seat has earned its name change, being now very much centred on the Bellarine Peninsula, the Surf Coast and outer southern Geelong. The Great Ocean Road from Anglesea on goes to Wannon; rural areas around Meredith go to Ballarat, compensating it for its losses to Hawke. All of which gives Labor what may prove a handy boost of 0.8%.

Deakin. Only a few tweaks to this important marginal seat, reducing the Liberal margin from 54.8% to 54.6%. 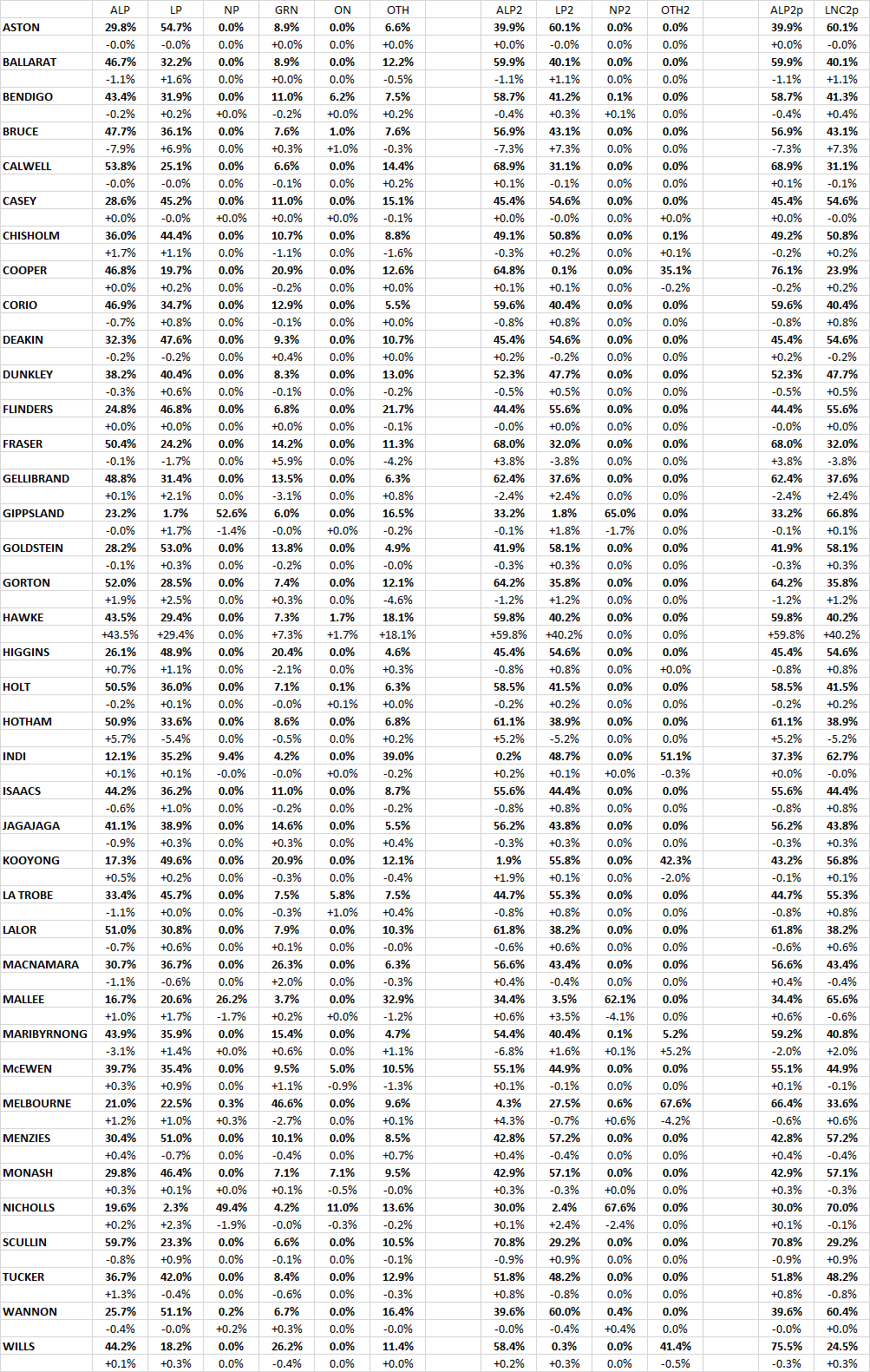