It’s close but no cigar for Labor in the latest reading of the BludgerTrack poll aggregate, which projects the Turnbull government grimly hanging on to a parliamentary majority.

As the many polls published before this week’s parliamentary sitting showed no let-up in the Coalition’s deteriorating standing in the polls, the BludgerTrack poll aggregate has come as close as close can be to tipping over in Labor’s favour. However, it continues to credit them with a bare parliamentary majority (which can probably be bumped up another notch with the near certainty that Clive Palmer’s seat of Fairfax will revert to type), owing to the advantage it attributes to sitting members. The boost to Labor adds five to their projected seat total, including three gains in Queensland, two in Western Australia and one in New South Wales, balanced by the loss of one in Tasmania. Note that the Nick Xenophon Team now gets its own entry on the vote totals (although not yet on the graphs), since its primary vote is now being tracked by ReachTEL as well as Roy Morgan. ReachTEL is no longer recording the Palmer United Party, whose support is now statistically insignificant.

Newspoll and Ipsos both provided new numbers on leadership ratings this week, the effect of which has been to throw things a little out of whack, owing to the gaping difference in the numbers for Malcolm Turnbull. Where Ipsos recorded Turnbull with a diminishing but still positive net approval rating of 13%, Newspoll recorded the reverse (i.e. minus 13%), despite their similar results on voting intention. Since BludgerTrack uses bias adjustments based on each pollsters’ performance relative to all the others, this result alone has shaken up the entire model. With all that said though, all the movements on the leadership ratings were fairly modest.

The familiar BludgerTrack graphs on the sidebar are a casualty of the Crikey redesign that was launched this week, but stay tuned, because there will soon be a module to accommodate them. Here’s a make-do for the time being, below which you can find the latest round of preselection news and what have you. 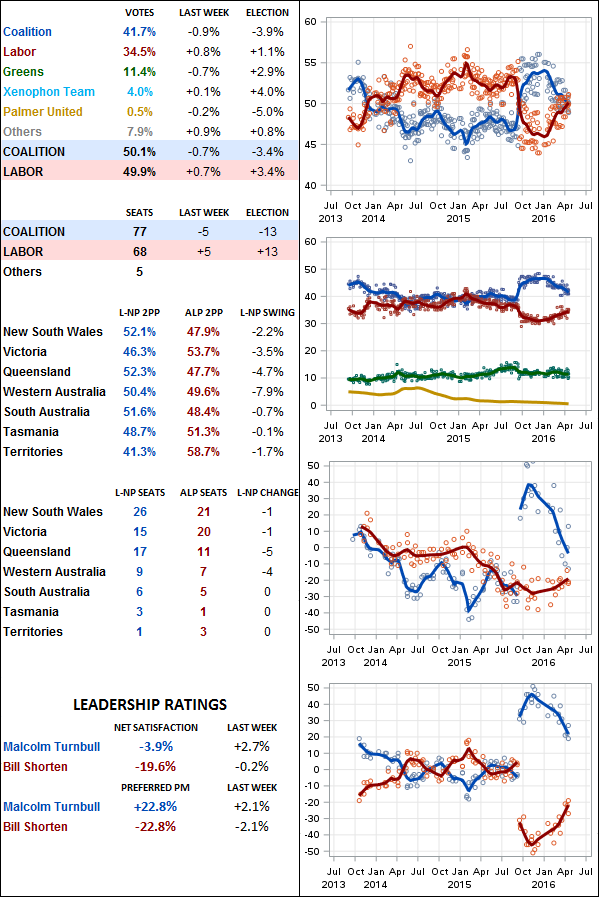 • The Greens are hawking a ReachTEL poll of 800 respondents in the seat of Melbourne Ports which finds 60% of Labor voters oppose the party directing preferences to the Liberals ahead of the Greens, as Labor member Michael Danby has threatened to do (albeit that he exceeded his brief in doing so). Danby’s threat came amid an increasingly complex situation with respect to preferences in Victoria, as Liberal Party state president Michael Kroger says the party is open to a “loose arrangement” with the Greens, who are “not the nutters they used to be”, which he puts down to the leadership of Victorian Senator Richard di Natale. Kroger’s hope is presumably to lure the Greens into running open tickets in Victorian marginal seats, in return for the Liberals directing preferences to the Greens ahead of Labor in the inner-city seats of Melbourne, Wills and Batman, contrary to their position in 2013.

• After 22 years as local member, and 29 in parliament altogether when her time as a Senator is taken into account, former Speaker Bronwyn Bishop was defeated in Saturday’s preselection vote in her northern beaches Sydney electorate of Mackellar. The seat will now be contested for the Liberal Party by factional moderate Jason Falinski, owner of a health care equipment business, former adviser to John Hewson and Barry O’Farrell and campaign manager to Malcolm Turnbull in Wentworth in 2004. Falinski prevailed over Bishop in the final round by 51 votes to 39, following the exclusion of Walter Villatora – a party activist who has spearheaded a campaign for preselection reforms that are principally favoured by the hard Right, and a close ally of Tony Abbott’s as the president of the Liberal Party’s Warringah branch. The score in the previous round had been Falinski 40, Bishop 37 and Villatora 12, with Villatora’s supporters breaking overwhelmingly in favour of Falinksi in the final round. This reflected the hostility of conservatives towards Bishop over her support for Malcolm Turnbull in the September leadership challenge vote. The currently unpaywalled Crikey has a thorough account of Saturday’s proceedings from a source familiar with the matter.

• Another safe seat Liberal preselection on the weekend, in Philip Ruddock’s seat of Berowra, resulted in an easy victory for Julian Leeser, a former executive director of Liberal-aligned think tank the Menzies Research Centre, and current director of government policy and strategy at the Australian Catholic University. Leeser is of Jewish background, and is said to be aligned with the Centre Right. He won 97 votes in the ballot against 10 for Robert Armitage, a local barrister; four for John Bathgate, a staffer to Christoper Pyne; and three for Nick McGowan, a one-time adviser to former Victorian Premier Jeff Kennett.

• Bob Baldwin, the Liberal member for the regional New South Wales seat of Paterson, has announced he will not contest the next election. Baldwin suffered a heavy blow in the redistribution as the seat exchanged conservative rural territory for more populous areas of the Hunter region, turning Baldwin’s 9.8% margin from 2013 into a notional Labor margin of 1.3%. The Michael McGowan of the Maitland Mercury reports preselection nominees are likely to include Newcastle businesswoman Karen Howard and Port Stephens councillor Ken Jordan. Howard performed well as an independent candidate in the Newcastle state by-election of October 2015, and ran for the Liberals in the seat at the state election the following March. However, her tone-deaf attack on a local high school student over his geography project in November might cause some to doubt her judgement.

• After a bumpy ride, Liberal MP Craig Kelly has been confirmed in his preselection for the southern Sydney seat of Macarthur. The conservative Tony Abbott backer had earlier appeared to be under threat from Kent Johns, a powerbroker of the increasingly dominant moderate faction, but Malcolm Turnbull persuaded him to withdraw in February. He remained under challenge from Michael Medway, who ran in Werriwa in 2004 and appears to work in financial services, but Murray Trembath of the St George & Sutherland Shire Leader reports he has now withdrawn.

• The article mentioned in the previous item also relates that Nick Varvaris, who won Barton for the Liberals in 2013 but has now been poleaxed by the redistribution, was “still in discussions with the Liberal Party” as to whether he will recontest the seat, after earlier indications he would spare himself the effort.

• Barrister Andrew Wallace has won the Liberal National Party preselection to succeed Mal Brough in the Sunshine Coast seat of Fisher. As the ABC reports it, Wallace “won the preselection ballot convincingly in the first round of voting ahead of five other candidates”.

• The West Australian reports on the headache facing the WA Liberals as they prepare to defend six Senate seats at a double dissolution election that is likely to net them fewer than that, with none of the incumbents intending to retire. It had been hoped that David Johnston, who was dumped as Defence Minister in December 2014, might lighten the load by accepting a diplomatic posting, but he has now confirmed he will run again. The report says the state branch’s protocol should see ministers Mathias Cormann and Michaelia Cash take the top two positions and Johnston take third owing to “seniority”, but that Johnston might be bumped to fourth to make way for Dean Smith, with Linda Reynolds and Chris Back in fourth and fifth.

• The West’s report likewise says that Louise Pratt, who lost her seat from the second position at the state’s 2014 Senate election re-run, is well placed to take the fourth position on the Labor ticket with help from affirmative action, and is even hopeful of bumping Glenn Sterle for a place in the top three. Earlier indications had been that the order of the top end of the ticket would run Sue Lines, Glenn Sterle and Pat Dodson, with the fourth up in the air.

• Duncan McGauchie, a former policy adviser to the then Victorian premier, Ted Baillieu, has prevailed in a field of five to win Liberals preselection to succeed Sharman Stone as the Liberal candidate in the rural Victorian seat of Murray. He faces significant opposition at the election from Damian Drum, Nationals candidate and state upper house member.

• Labor’s candidate for Christopher Pyne’s loseable Adelaide seat of Sturt is Matt Loader, a gay rights activist and (I think) manager at South Australia’s Department of Planning, Transport and Infrastructure. Hat tip to Chinda in comments.