Labor’s still healthy two-party lead cops a dent in the post-budget Newspoll, but Resolve Strategic finds no significant change on three weeks ago.

The post-budget Newspoll finds Labor’s two-party lead at 55-45, in from 57-43 at the previous poll eight weeks ago. Both major parties are up on the primary vote, Labor by one to 38% and the Coalition by four to 35%. All other players are down: the Greens by two to 11%, One Nation by one to 6%, the United Australia Party by one to 1% and all others by one to 9%. Anthony Albanese’s lead on preferred prime minister has slipped from 61-22 to 54-27, and he is down two on approval to 59% and up four on disapproval to 33%. Peter Dutton is up on both approval and disapproval, respectively by four points to 39% and three points to 46%. The poll was conducted Thursday to Sunday from a sample of 1500.

The poll also includes the same suite of questions on response to the budget that Newspoll has been posing since the late 1980s, which you can read about here – I’ll have more to say about those later. Note also the other new posts below this one – my own lengthy compendium of New South Wales state election news, and Adrian Beaumont’s coverage of Brazil’s presidential election and other international electoral events.

UPDATE (Resolve Strategic): Now there is a Resolve Strategic poll from the Age/Herald, with stronger results for Labor: their primary vote is unchanged on the poll three weeks ago at 39%, with the Coalition up two to 32%, the Greens up one to 13%, One Nation down one to 4%, the United Australia Party down two to 1%, independents down one to 8% and others up one to 3%. Anthony Albanese leads Peter Dutton by 53-19 as preferred prime minister, in from 55-17 three weeks ago. The poll was conducted Wednesday to Sunday from a sample of 1611.

The budget was rated good for “the country as a whole” by 44% and for “me and my household” by 28%, compared with 50% and 40% respectively for the March budget – it’s not clear how many of the remainder particularly rated it as bad. Four options for action on power prices all received strong support: 79% for price caps, 59% for taxpayer subsidies for those on low incomes, 64% for heavily subsidising home solar power and 67% for reserving gas for the local market, with 3%, 14%, 11% and 4% respectively opposed. Thirty-six per cent considered Labor had broken promises to “cut power bills and get wages moving”, with 12% disagreeing and 53% either undecided or considering it too early to say.

UPDATE (Newspoll budget response): For the questions Newspoll asks after every budget, an even 29% rated it both good and bad for the economy, but 47% rated it negative for personal impact compared with only 12% for positive. Thirty-four per cent felt the opposition would have done a better job, with 48% disagreeing. Another question gauged the extent to which respondents felt the budget properly balanced the cost of living and the budget deficit: 6% felt it put too much emphasis on the former, 25% too much emphasis on the latter, 23% felt it struck the right balance and 31% felt it didn’t do enough for either.

This marks the thirty-sixth budget of which Newspoll has asked essentially the same set of questions going back to 1988. The results are the sixth worst for personal impact and the ninth worst for economic impact, although it rates in the middle of the pack on the question of whether the opposition would have done better. The latter point is illustrated by the first of the charts below, which records Labor budgets in red and Coalition budgets in blue. The second chart illustrates the correlation between positive results on personal and economic impact. In landing right on the trendline, this shows no particular sense that the budget favoured either economic concerns or personal finances relative to its somewhat negative reception overall. 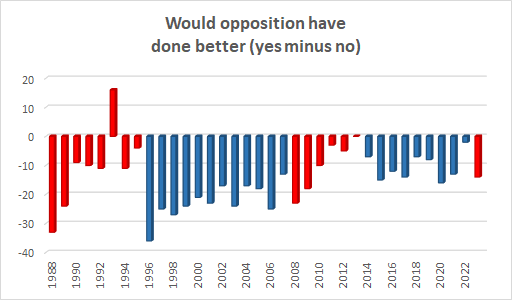 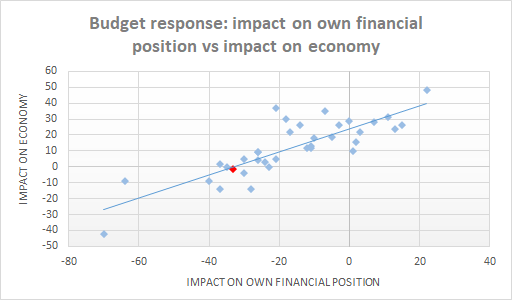