The lower house count concludes with the Coalition on 51.53% of the national two-party preferred; the button is pressed on the Senate for Queensland, Western Australia and South Australia; only the Victorian Senate result remains.

The last two-party preferred count for the lower house is complete, leaving the Coalition with a national two-party preferred total of 51.53%, which is exactly the result that was projected by the opinion polls, albeit for the wrong party. The Australian Electoral Commission website continues to record that 288 declaration vote envelopes remain unprocessed, of which 234 are in the seat of Kingsford Smith, but I suspect that may just reflect tardiness in keeping these numbers updated.

We should also have the last Senate result finalised this morning, that being in Victoria, where a result of three Liberal, two Labor and one Greens is assured. Counts were finalised yesterday in Queensland, Western Australia and South Australia. To complement previous efforts for New South Wales and Tasmania, I offer the following displays showing how the preference distributions proceeded. In each case they record where the votes stood after the election of candidates with full quotas at the start of the count, and also in the final stages, where three seats were decided in Queensland, and two were decided in Western Australia and South Australia.

First up, Queensland, where the result was three for the Coalition (Paul Scarr, Susan McDonald and Gerard Rennick, all newcomers) and one apiece for Labor (Nita Green, also a newcomer), One Nation (Malcolm Roberts, returning after falling foul of Section 44 and having his seat pass to Fraser Anning, whose own party proved uncompetitive) and the Greens (Larissa Waters, another Section 44 casualty who had already returned to the Senate after her successor, Andrew Bartlett, agreed to make way for her ahead of the election). Queensland was the one state where the result was not clear long in advance, although in the final analysis it wasn’t really all that close. The Coalition won two seats straight off the bat and Labor one, leaving Green, Roberts, Waters and Labor’s second candidate, Chris Ketter, in the mix for the last three. There never seemed much doubt that the fourth seat would go to One Nation and the fifth to the Coalition, but Labor might have hoped the dual miracle of a strong performance in late counting and unexpectedly strong preference flows could have given Ketter the last seat at the expense of Waters. In fact though, Ketter trailed Waters by 52,767 votes (1.8%) at the start of proceedings, which widened to 78,681 (2.7%) by the end, with Waters doing predictably well out of preferences from Animal Justice and Help End Marijuana Prohibition – although she didn’t quite make it to a quota. 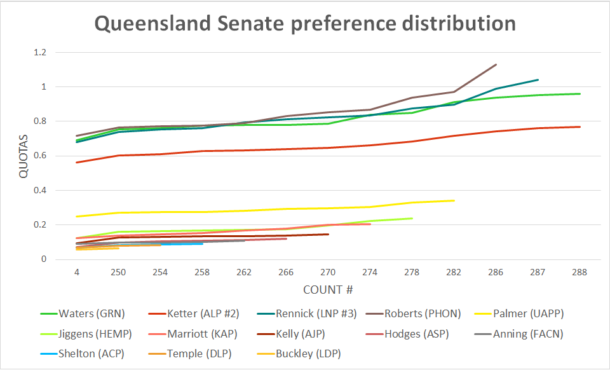 Now to Western Australia, which has returned three Liberals (incumbents Linda Reynolds and Slade Brockman, and newcomer Matt O’Sullivan), two Labor (incumbents Patrick Dodson and Louise Pratt) and one Greens (incumbent Jordon Steele-John). Reynolds, Brockman and Dodson were elected off the bat; O’Sullivan got most of the way there when the 1.4% Nationals vote was distributed; and Pratt and Steele-John were always going to get there late in the count ahead of One Nation incumbent Peter Georgiou. 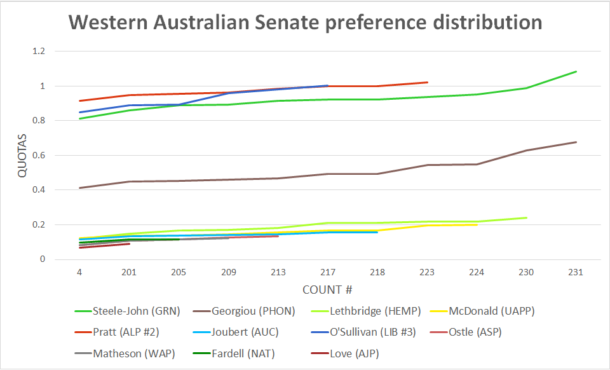 South Australia produced the same result as Western Australia (and indeed New South Wales and Victoria, if the Coalition is considered collectively), the three Liberals being incumbents Anne Ruston and David Fawcett, and newcomer Alex Antic; Labor returning incumbent Alex Gallacher and newcomer Marielle Smith; and the Sarah Hanson-Young retaining her seat for the Greens. The top two on the Liberal and Labor tickets were elected off the bat; Hanson-Young made a quota after the third Labor candidate and the Help End Marijuana Prohibition candidate dropped out; and Antic stayed well clear of One Nation throughout to take the last seat. 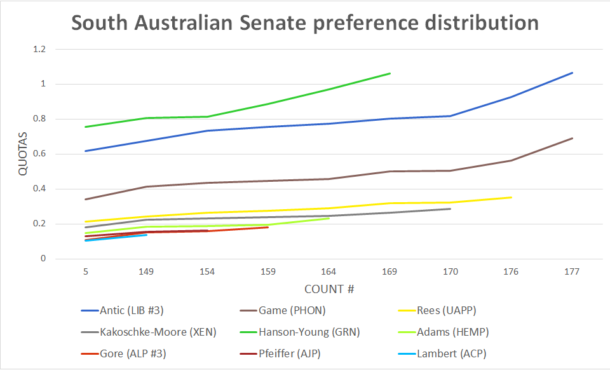 The overall picture in the Senate was summarised here a few weeks ago – all that’s different now is that the “likely” qualification can be removed from Queensland.

The Victorian result was finalised this morning (Wednesday), producing the anticipated result of three seats for the Liberals (incumbents James Patterson and Jane Hume, and newcomer David Van), two for Labor (Raff Ciccone, who came to the Senate after filling a casual vacancy in March, and Jess Walsh, a newcomer) and one for the Greens (incumbent Janet Rice). The chart below follows the same format as those above, and shows that this was not a close run thing. The Coalition and Labor both had two quotas on ticket votes, leaving two seats to be determined through the preference distribution. Labor’s third candidate, incumbent Gavin Marshall, was never in contention, and his exclusion pushed the Greens to a quota with Van, Derryn Hinch and One Nation still in the count. One Nation then were excluded, leaving David Van well ahead of Hinch to take the final seat, without making it to a quota. 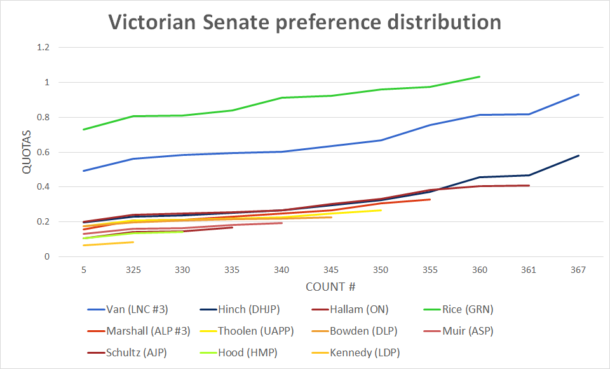