A close look at the New South Wales Senate result as finalised yesterday, plus Essential Research findings on attitudes to nuclear power.

Essential Research is continuing to provide The Guardian with polling on a fortnightly basis, but is still limiting itself to issue polling in the wake of the great debacle of last month. This week’s poll is concerned with nuclear power, after a push by Queensland MPs James McGrath and Keith Pitt for a parliamentary inquiry into lifting Australia’s nuclear power ban (showing rather unfortunate timing, in view of the runaway success of HBO’s television series Chernobyl). The poll finds a slight majority of 44% to 40% in favour of Australia having nuclear power plants, compared with a 40-40 tie when Essential last posed the question in 2015 – the kicker being that only 28% said they would be comfortable living near one, with 60% disagreeing. Among the other findings, 47% per cent rated that nuclear would be better than coal-fired power for the environment.

In election counting news, the button was pressed yesterday on the New South Wales Senate result, which, foreseeably, produced three seats for the Coalition (Liberals Hollie Hughes and Andrew Bragg, and Perin Davey of the Nationals), two for Labor (Tony Sheldon and Tim Ayres) and one for the Greens (Mehreen Faruqi). Above-the-line votes accounted for 93.1% of the total, which included more than two quotas each for the Coalition and Labor (albeit just barely in the latter case). This meant the top two candidates on the Coalition and Labor tickets were elected immediately, leaving two seats to be determined by the remainder of the preference distribution. The chart below shows how this proceeded as the last eight candidates were excluded, and also shows how the main candidates were placed after the surpluses of the first four elected candidates were distributed (Count 4). 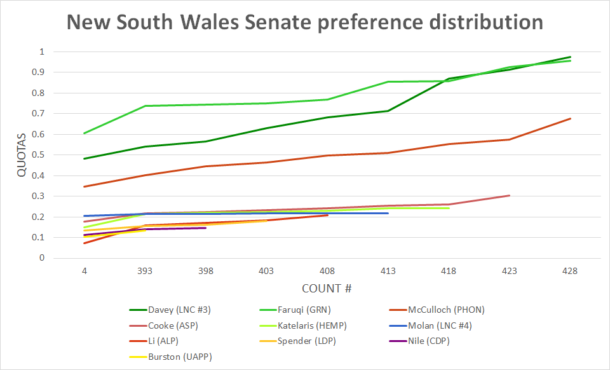 Under the old system, the entirety of the vote was effectively divided between the sixth elected candidates and the unelected seventh, who was left with what is known as the “wastage quotas”. Now that it’s possible for votes to exhaust, it becomes possible for the count to fail to deliver quotas to six candidates, in which case the final seats go to whoever comes nearest at the final count. Such was the case with the last two seats in New South Wales – 0.39 quotas exhausted, and the final three quotas were distributed between three candidates in such a way as to leave all of them short of a full quota. Two of these candidates, Davey of the Nationals and Faruqi of the Greens, finished just short with 0.97 and 0.96 quotas respectively, causing them each to be elected well ahead of Kate McCulloch of One Nation on 0.68.

The chart illustrates exactly how far Jim Molan, shown in blue, fell short of winning the third seat through the strength of his below-the-line support, notwithstanding conservative excitement that he achieved the highest below-the-line vote in Senate history – in terms of aggregate votes, which is naturally a significant qualification when considering a result from New South Wales. Molan’s total share of the first preference vote was 2.92%, some distance behind a number of recent results in Tasmania, where the rate of below-the-line voting is particularly high. His exclusion unlocked a flood of preferences to Davey that closed the gap between her and Faruqi, who were all but level for the remainder of the count.

However, a good many of Molan’s preferences flowed out of the Coalition ticket and further to the right, with 20% going to McCulloch compared with 71.5% for other Coalition candidates. McCulloch also received a strong flow of preferences when Shooters Fishers and Farmers were the last party excluded two counts later. However, this was well short of what she needed to put her in the hunt for the last two seats, for which her share of the total vote would have had to have been about 2% higher. For more details on preferences, Ross Leedham has determined four-party preferred preference flows along the same lines as I provided in yesterday’s post on the Tasmanian result, observing how small party preferences split between the Coalition, Labor, the Greens, One Nation and exhaustion.

To get a sense of how the result might have played out under the old system, I’ve had a play with Antony Green’s Senate calculator from 2013, using the results from this election where possible and judiciously allocating the residue from new parties to old ones. This suggests One Nation would have won the fifth seat at the expense of either the Coalition and the Greens, who would have been in a very tight race for the last seat. One Nation preference feeders would have included not only Shooters and Fishers, Liberal Democrats, Christian Democrats, the Democratic Labour Party and Australian Conservatives (nee Family First), but also leftist concerns such as Animal Justice, thanks to Glenn Druery-inspired preference networks that had nearly every micro-party preferencing each other ahead of the main three.

The button will apparently be pressed on the Western Australian result this morning and Victoria tomorrow, both of which will assuredly produce results of three Liberal, two Labor and one Greens. Not sure when Queensland and South Australia will be done.