A consideration of whether the poor reputation of seat polling is really deserved (short answer: yes).

Still no new polls, so let’s take a look at some old ones instead. After the 2016 election, I wrote an article for Crikey on the performance of the pollsters, particularly in regard to seat polls, and published here a chart showing the distribution of their errors. After being asked if the findings bore up over the seat polling conducted since, I have now conducted a similar exercise on seat polls conducted since the 2016 federal election, of which I identified 25 conducted in the final fortnight of various state elections and federal by-elections. However, rather than use the two-party results, which have separate issues of their own, I have produced separate results from Labor and Coalition primary votes. These can be found at the bottom of the post.

In the 2016 analysis, I concluded that the polls behaved more like they had a 7% margin of error than the 4% margin theoretically associated with polls sampling 500 to 600 respondents, as is typically the case with seat polls. It turns out that this chimes quite well with the polls conducted since. The mean error for the Coalition was +1.9%, which is to say the average poll had the Coalition that much too high high, while for Labor it was -0.5%. The difference is just inside statistical significance (the p-value on a two-sample t-test coming in at 0.047).

However, this does not mean you can confidently treat any given seat poll as biased to the Coalition, because their record is so erratic that any given poll could fall either way. The charts below record the spread of pollster errors (i.e. their result for a given party’s primary vote minus the actual result) as histograms, with two distribution curves laid over them – a thinner one in black, showing what the curve should theoretically look like with a 4% margin of error, and a thicker one in blue, showing their actual distribution. The lower and flatter the blue curve, the more erratic and unreliable were the results. As such, the charts show seat polls have been particularly wayward in predicting the Coalition primary vote. They have been somewhat nearer the mark with Labor, but still below theoretical expectations. The distributions suggest an effective margin of error for Labor of 6.5%, and for the Coalition of fully 9.5%.

It should be acknowledged, however, that a lot can happen over the last fortnight of an election campaign, and pollsters can always defend an apparent misfire by asserting that the situation changed after the poll was conducted. Perhaps significantly, the two worst performing polls in this analysis only barely fit within the two-week time frame. These were YouGov Galaxy polls from the Victorian “sandbelt” seats of Mordialloc and Frankston at the state election in November last year, crediting Labor with two-party votes of 52% and 51% in seats where the final results were 62.9% and 59.7%. If these cases are removed, the mean Coalition error comes down to +1.1% and the effective margin of error to 8.4%; while for Labor, the mean becames +0.1% and the margin of error 5.3%. 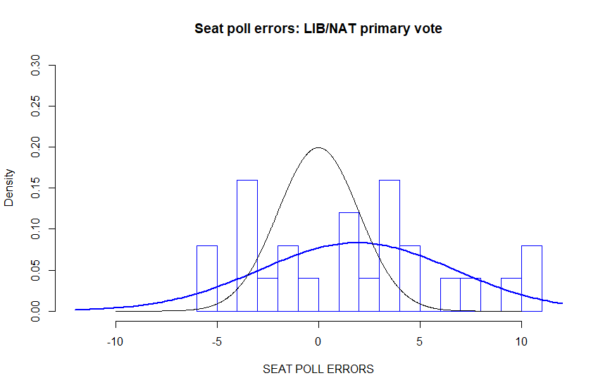