Labor maintains its commanding lead in the latest ReachTEL poll, as respondents give the thumbs down to company tax cuts.

A ReachTEL poll for Sky News finds Labor maintaining its 54-46 lead from the last such poll a month ago. However, the primary votes are not quite as strong for Labor as last time, when Labor’s two-party lead was subdued by a strong flow of respondent-allocated preferences to the Coalition. This time the Coalition is up one on the primary vote to 34%, while both Labor and the Greens are down a point, to 36% and 10% respectively, and One Nation are steady on 7%.

The poll also finds 56% of respondents opposed to company tax cuts, with only 29% supportive, and only 26% thinking it likely the cuts will be passed on to workers, compared with 68% for unlikely. Not surprisingly, a question on whether Tony Abbott should return as Liberal leader after the next election finds little support, with 25% for yea and 64% for nay.

Together with the Newspoll and Essential Research, the ReachTEL results have been included in the lastest BludgerTrack update, which once again records essentially no change on voting intention, with ReachTEL’s strong result for Labor cancelling out a weak one from Essential Research. However, Labor is up two on the seat projection for Queensland, mostly because Galaxy’s 52-48 lead for the Coalition in that state in a Courier-Mail poll a month ago is no longer exerting its pull. Also included are the latest leadership ratings from Newspoll, which take a small bite out of Malcolm Turnbull’s net approval and preferred prime minister lead. We should have Newspoll’s quarterly state breakdowns next week, which will make the BludgerTrack state breakdowns a little more robust.

If you’re a Crikey subscriber, you can enjoy my piece today on how the recent halt to the rise of minor parties might play out in the Senate over the coming years. Below is a chart I knocked up to illustrate it, which I decided not to use. It combines federal and state election results, so that the reading at any point in time uses results from the most recent elections federally in each state, with each election weighted by its voting population. 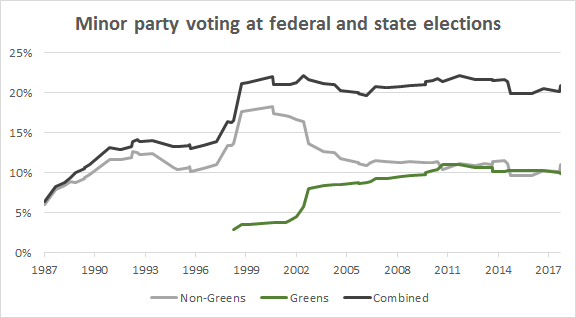