Analysis of British election polling, and lots of of it.

Then there’s Scotland, where a separately conducted poll trend calculation produces results of Scottish National Party 42.7% (down 7.3% on the 2015 election), Conservative 27.2% (up 12.3%), Labour 19.3% (down 5.0%) and Liberal Democrats 5.8% (down 1.7%). However, the error bars here are rather wide — most of the data points are small sample breakdowns from national polls, with the most recent Scotland-specific poll, from Ipsos-MORI a week ago, having Labour and the Conservatives level on 25%. For what it’s worth though, crudely applying these swings to the 2015 vote shares results in the SNP dropping eight of their 56 seats, with seven going to the Conservatives and one to the Liberal Democrats.

All told, that suggests a result of 327 seats for the Conservatives, down from 330 at the 2015 election, and 242 for Labour, up from 232, out of a total of 650 — assuming no change to the Liberal Democrats’ seven seats in England and Wales, and making no effort to account for the 18 seats in Northern Ireland.

As I discusssed at length in Crikey on Friday, the more interesting story to emerge from the polling is the disparity between voting intention of younger and older respondents, such that pollsters’ findings are heavily dependent on the relative weightings they apply to them. This is demonstrated in the chart below, which records Labour’s gain among respondents aged 18-34 has been twice as great at among those aged 55 and over, from a base that was already remarkably wide to start off with.

Age loomed large in the polling industry’s failure at the 2015 election, with Anthony Wells of YouGov and UK Polling Report observing that the single biggest issue was that pollsters surveyed “too many younger people who were too engaged and too interested in politics”. Broadly speaking, one of the approaches to dealing with this issue has been to construct turnout models based more on the age and class structure of the voting population at the 2015 election, as recorded by post-election surveys — and it is these pollsters who have recorded the strongest results for the Conservatives.

ComRes, ICM and Kantar have followed this pattern throughout the campaign, while Panelbase has done so since a methodology change that has applied to the latest two out of their six campaign polls. The effect in each case has been to downweight younger respondents, and hence support for Labour. If Labour’s hope of a turnout surge among younger voters is borne out, these polls will no doubt be found wanting.

Indeed, various other methodological adjustments by these pollsters appear to be producing a turnout population that is somewhat older than that in 2015 (see table below). In the case of ICM, which is weighting by self-identified political interest levels, one recent poll was calculated by Wells as producing a Conservative lead eight points greater than would have been the case using the pollsters’ 2015 models.

Survation, which famously produced an accurate result on the eve of the 2015 election but shied away from publishing it, has not made any radical changes to its methodology, which continues to rely heavily on self-identification for turnout. Its age structure has varied considerably from poll to poll, but overall it has projected stronger turnout among the young than in 2015, and has accordingly produced strong results for Labour.

ORB appears to be splitting the difference between self-identification and turnout by age and education as recorded in 2015, and has produced the strongest results of all for Labour — albeit that this is heavily influenced by one outlier result in late April, when it recorded a Conservative lead of a mere 11%, as opposed to the trend measure of 19.6% at that time.

YouGov has received considerable attention for its strong results for Labour late in the campaign, but it has only been since mid-May that any such lean has been evident. This pollster has sought to redress the failings of 2015 by weighting by self-identified political interest level and education qualification, again with the aim of matching their results to post-election surveys. Its age model makes it hard to compare with other pollsters, since it uniquely breaks the middle groupings into 25-49 and 50-64 cohorts. However, its modelled turnout population looks more like the population at large than turnout in 2015.

Another big-name pollster, Ipsos MORI, has persisted with weighting by self-identified likelihood of voting, and accordingly has a young turnout model as compared with the 2015 election. However, this has not translated into particularly strong results for Labour, albeit that it has only published three results in the course of the campaign. The pollster has sought to address the industry-wide problem with over-representing the heavily engaged by weighting by education and newspaper readership, and using a range of indicators to exclude potential non-voters.

Opinium has been an odd man out in that its age breakdowns resemble those of ComRes, ICM and Kantar, but it has not produced correspondingly strong results for the Conservatives. Whereas the latter pollsters have purposefully weighted to a specific age model, Opinium appears to have achieved a similar effect through weighting to reported vote in 2015.

For further illumination on these matters, the following table shows how much weight each pollster has given to its various age cohorts, using averages of their polling over the campaign period. The final column is an averaged measure of how much the pollsters’ recorded Conservative leads have differed from the trend measure.

And finally, self-explanatory trend charts with the Conservatives shown as blue, Labour as red, Ukip as purple, the Liberal Democrats as gold, and the Scottish Nationalist Party as teal. 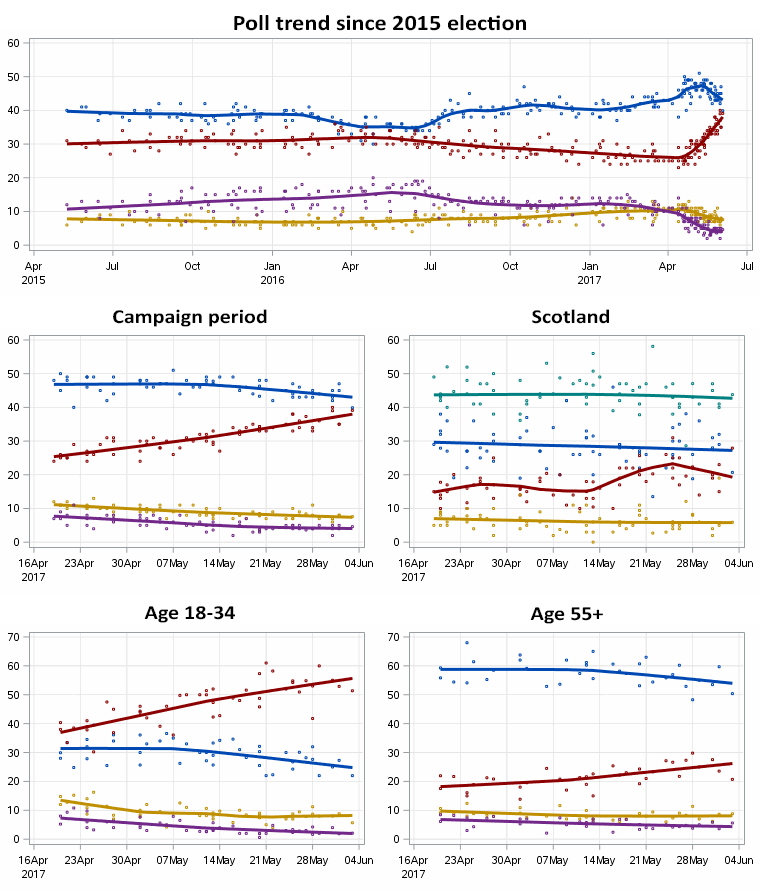