Daylight has finally opened between the two parties on the BludgerTrack poll aggregate, without quite freeing the Coalition from the risk of a hung parliament.

What would normally be the regular weekly reading of BludgerTrack, conducted after Essential Research completes the weekly cycle, finds a late break in favour of the Coalition, who have recorded a stronger result from Newspoll and two successive above-par showings from ReachTEL. The latest numbers also incorporate the Newspoll state breakdowns published on Monday by The Australian, together with state-level numbers from Essential and ReachTEL. The former were chiefly notable in finding a weaker swing to Labor in Western Australia than polling earlier in the campaign indicated. BludgerTrack now records a 5.5% swing in WA with two seats falling to Labor, which finally brings it into line with what both parties say they are anticipating.

The national seat projection now records the Coalition at 80, with gains since last week of two in New South Wales and one each in Victoria and South Australia. However, since this is a two-party model, it fails to account for the threat the Coalition faces from non-major candidates in New England, Cowper and at least three South Australian seats under threat from the Nick Xenophon Team, and hence can’t be seen as definitively pointing to a Coalition majority. Full details at the bottom of the post, together with the latest reading of Coalition win probabilities on the betting markets, which seem to have resumed moving upwards after a ten-day plateau.

The final reading of the Essential Research fortnightly rolling average has the Coalition down a point on the primary vote 39%, but is otherwise unchanged on last week with Labor on 37%, the Greens on 10% and the Nick Xenophon Team on 4%, with Labor leading 51-49 on two-party preferred. There was also a follow-up question on preferences from those who voted for minor parties and independents, with Greens voters splitting 86-14 to Labor (83-17 at the 2013 election) and others going 52-48 to Liberal (53-47 last time), but high “don’t know” results limit the usefulness of these figures.

The poll also records Malcolm Turnbull gaining two on approval since a fortnight ago to 40% while remaining steady on disapproval at 40%, while Bill Shorten is up three to 37% and down one to 39%. Turnbull’s lead as preferred prime minister is unchanged at 40-29. Of the remaining results, the most interesting for mine is that 50% think it very likely that a Liberal government would privatise Medicare, with only 34% rating it as not likely. The poll also records 30% saying Turnbull and the Liberals have run the better campaign, 28% opting for Bill Shorten and Labor and 8% favouring Richard di Natale and the Greens; 39% expecting a Coalition majority versus 24% for Labor and 16% for a hung parliament; and that 63% would support “phasing out live exports to reduce animal cruelty and protect Australian jobs” (a bit leading, in my view), with only 18% opposed. 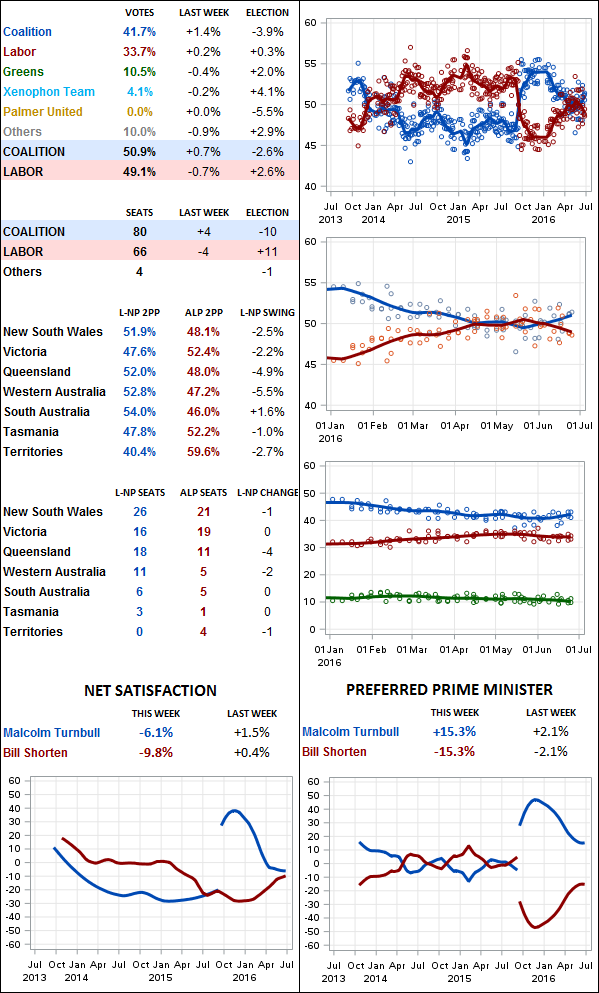 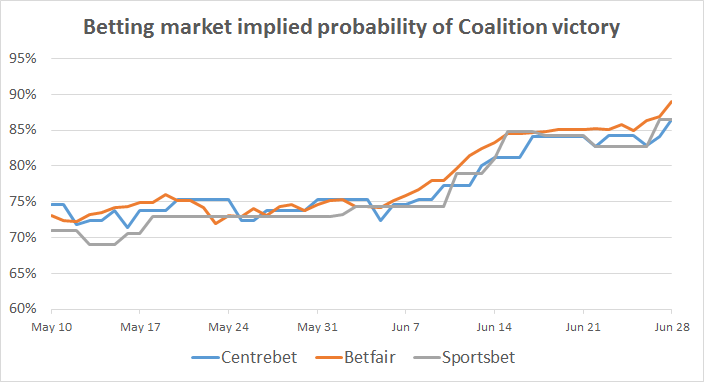