Two new national polls do nothing to dispel perceptions of a tight race, and they’re accompanied by another result showing Labor with its nose in front in the key outer Sydney seat of Macarthur.

Two new national polls this evening, plus a local one from the electorate of Macarthur:

• The latest Ipsos result for the Fairfax papers, which we can now expect on Friday night rather than Sunday at least for the period of the campaign, has the Coalition two-party lead unchanged at 51-49, with the Coalition primary vote down a point to 43%, Labor up one to 34%, and the Greens steady on 14%. Malcolm Turnbull’s lead as preferred prime minister is down from 51-29 to 47-30, and his approval rating is steady on 48%, with disapproval down two to 38%. Bill Shorten is respectively up two to 40% and down three to 46%. The poll was conducted Tuesday to Thursday from a sample of 1497, compared with the usual Ipsos survey period of Thursday to Saturday.

• There is also a separate ReachTEL poll for the Macarthur electorate, which the Russell Matheson holds for the Liberals on a post-redistribution margin of 3.3%, down from 11.4% at the 2013 election. Here ReachTEL credits Labor with a 51-49 lead on two-party preferred. After distributing results from a secondary question prompting the 10.7%, the primary votes are Liberal 41.4%, Labor 41.1%, Greens 7.3% and Nick Xenophon Team 2.5%. The poll was conducted last night from a sample of 628.

UPDATE: Here’s what the BludgerTrack tables look like with the ReachTEL and Ipsos result added, including the Ipsos leadership ratings. This translates into a higher result for “others” at the expense of both major parties, with no change to the national two-party result (UPDATE: Turns out this was because I’d failed to distribute ReachTEL’s undecided results, so scratch that). The Coalition is down a seat in New South Wales and up one in Western Australia, although the remarkable swing result from the latter is only slightly modified. 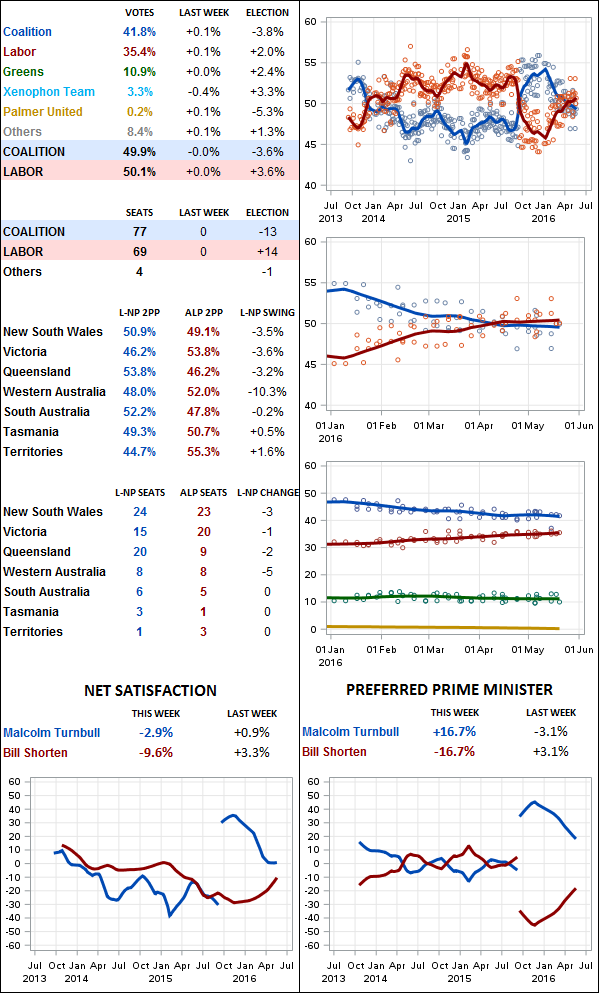 UPDATE 2: Here’s another chart to brighten your weekend, this one tracking the state-level swings to or from the Coalition on Malcolm Turnbull’s watch. Broadly speaking, what emerges is a levelling off since March everywhere except Western Australia, where the momentum of the government’s early year slide has been maintained. The uptick to the Coalition in Queensland is a curiosity, and may simply reflect the dominance there at the moment of a single data point, namely the 1176-sample poll there from Galaxy last week (though it’s not nearly as dominant as last week’s 3019-sample state-level poll from ReachTEL is in Tasmania). You might also find evidence that the submarines contract was a steadier for the Liberals in South Australia if you’re looking at it, but the elephant in the room there is the 22.2% others vote, which crept up from 13.5% at the start of Turnbull’s tenure to 14.6% at the end of the year, and has since swelled to 22.2%. I’ll provide a more detailed display of state-level breakdowns soon, I promise. 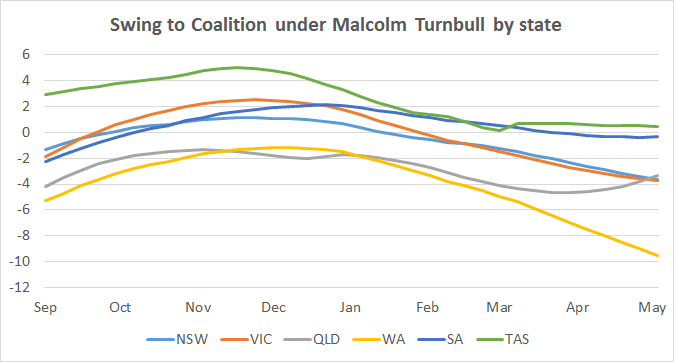