A Galaxy state poll for Queensland find Campbell Newman maintaining its commanding lead, although his personal rating is off a little from three months ago.

The Courier-Mail reports a Galaxy poll conducted November 13-14 from 800 respondents finds Queensland’s Liberal National Party government leading Labor 57-43 on two-party preferred, unchanged on the last such poll in early August. The primary votes are 45% for the LNP (down two), 33% for Labor (down one) and 8% for the Greens (up one), with Katter’s Australian Party well off its highs of earlier in the year at 5% (down one). The Palmer United Party isn’t accounted for, but “others” is up three to 9%. Campbell Newman’s lead over Annastacia Palaszczuk as preferred premier is down substantially, from 54-31 to 46-33, which seems mostly to do with improved sentiment for Palaszczuk, who is up three on approval to 37% and down six on disapproval to 30%. Newman’s own personal ratings are little changed, with approval down one to 43% and disapproval steady on 49%. The poll also finds 56% backing the government’s “decision to target bikies” with “more than one in three opposed”, but 41% rate the measures “too tough” against 44% who think them appropriate. If Galaxy’s usual practice is any guide, results for federal voting intention in Queensland should follow tomorrow.

Now for some charts plotting the Newman government’s progress over the current term. The first tracks primary voting intention, two-party preferred being less than entirely illuminating given optional preferential voting and a high “others” vote of variable composition (shown in grey). Among the things this chart demonstrates is that a glut of Queensland state polling dried up as pollsters were given a federal election to contend with, but it doesn’t appear that the situation has fundamentally changed over that time.

There are also enough data points now to put together a useful chart of preferred premier, which points to a picture of steady and ongoing improvement for Annastacia Palasczcuk.

Then there’s the following brought to us by Possum Comitatus, which I take to be the fruit of polling conducted privately for Together Queensland by ReachTEL. It suggests that Campbell Newman is unlikely to be re-elected should he stand again in Ashgrove, the seat he successfully gate-crashed as part of the scheme at the March 2012 state election which brought him to parliament and the premiership in one fell swoop. The “demographic projection model” shows how Ashgrove should theoretically be tracking according to modelling based on poll results from throughout Queensland, which Possum interprets as Campbell Newman personally dragging his own vote down by about 4%. 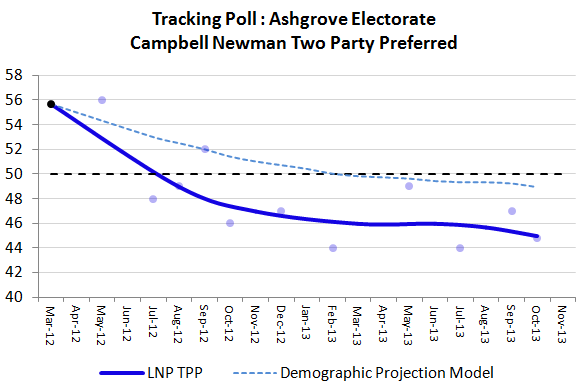